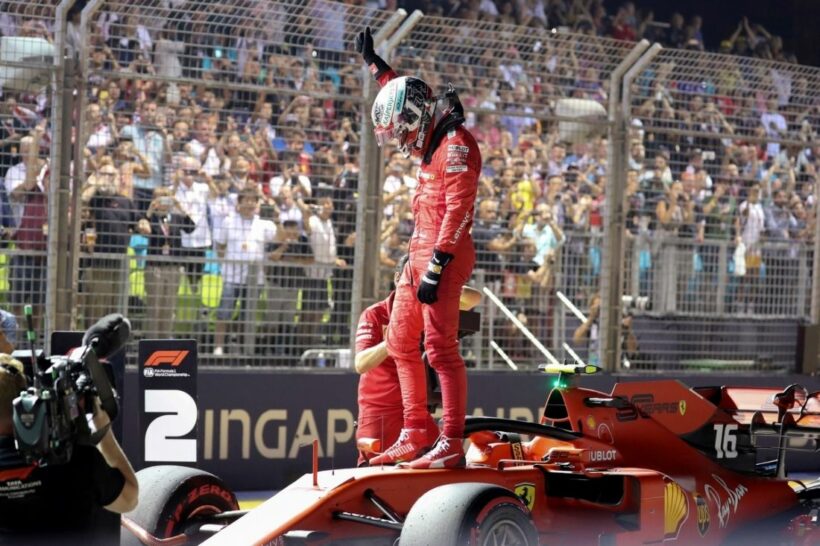 “Lewis Hamilton admits he is surprised to be next to a Ferrari on the grid after qualifying for the Singapore Grand Prix alongside pole-winner Charles Leclerc.”

Championship leader Hamilton was able to do little to prevent Ferrari’s Leclerc from claiming consecutive victories in Spa and Monza in the last two GPs but the Italian outfit were given little chance of gaining a third straight win at the technical 23-turn Marina Bay Street Circuit on Sunday.

Hamilton arrived in Singapore expecting to fight Red Bull’s Max Verstappen for victory but 21 year old Leclerc put himself in contention for a sensational hat-trick of GP wins with a stunning 1:36.217 second lap to edge out Hamilton by 0.191s, with the Monegasque’s teammate Sebastian Vettel in third.

“We came into the weekend knowing we would have a fight with the Red Bulls, especially knowing that the Ferraris had not been that strong at tracks with high downforce,” Hamilton told reporters at a circuit where he has tasted victory on four occasions.

“I still like how close it was for us all today and hopefully that puts us in good stead for a fight tomorrow.”

Hamilton, who has won eight times already this season and is on course for a sixth world title, was disappointed Mercedes were unable to convert their superior performance from Friday practice into a pole position a day later.

“Yesterday was a much smoother day for me and today I just felt we lost performance and everyone else improved,’ he added.

“The first run in the final qualifying session didn’t feel so good, (we were) a second behind and looking like quite a leap was needed to catch them up, but I just managed to pull some time back on that last clean run, but that slow first sector is where it was lost.

With seven rounds remaining, Hamilton leads the title race by 63 points from his Mercedes team mate Valtteri Bottas with Verstappen in third, 99 points adrift, and Leclerc and Vettel in fourth and fifth respectively more than 100 points behind. 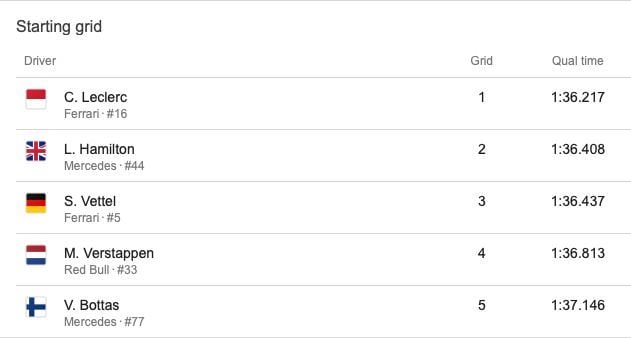