The story of a lucky dog. But how did he get there?

by Nicola Stow via VIRAL PRESS

Workers onboard a Thai oil rig noticed a dog’s head poking above the ripples as she was paddling around the Gulf of Thailand on Friday. The rig was 22o kilometers off the coast of Songkhla. It’s understood the Aspin dog, named Boonrod (Thai for ‘survivor’) by her rescuers, fell from a fishing trawler, according to the Bangkok Post.

Offshore drillers called out to the exhausted dog and she swam towards them, taking refuge among the rusty metal bars of the rig.

The workers then lowered a rope down to Boonrod and pulled her to safety. She stayed on the drilling platform for two nights while a special cage was welded and staff gave her food and water.

Boonrod was finally lifted by crane onto another oil vessel passing through the area last Sunday, which delivered her to vets in Songkhla, southern Thailand.

Khon Vitisak, an oil rig worker, who pulled the animal to safety, says he would like to adopt her if no owner comes forward.

“We just saw her small head but if the ripples were bigger, I think we probably wouldn’t have noticed her at all. We found her trying to swim towards our rig, which is about 220 kilometres from the shore. Thankfully the sea was quite still because the wind was calm.”

“After she made it onto the bars below the rig she didn’t cry or bark at all. We looked for a way to help her and in the end, decided to use the rope to tie around her body to lift her up. When we first took her on board she was depressed and tired from being in the water for a long time.” 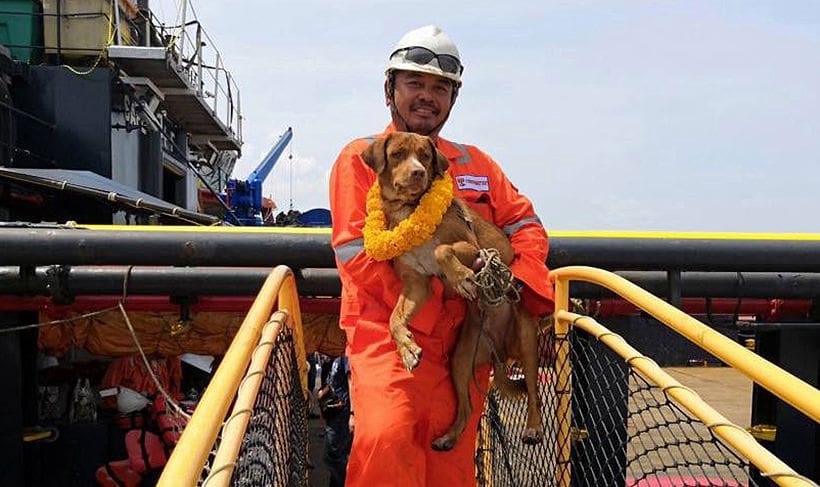 Village leader killed in Yala in an insurgent ambush