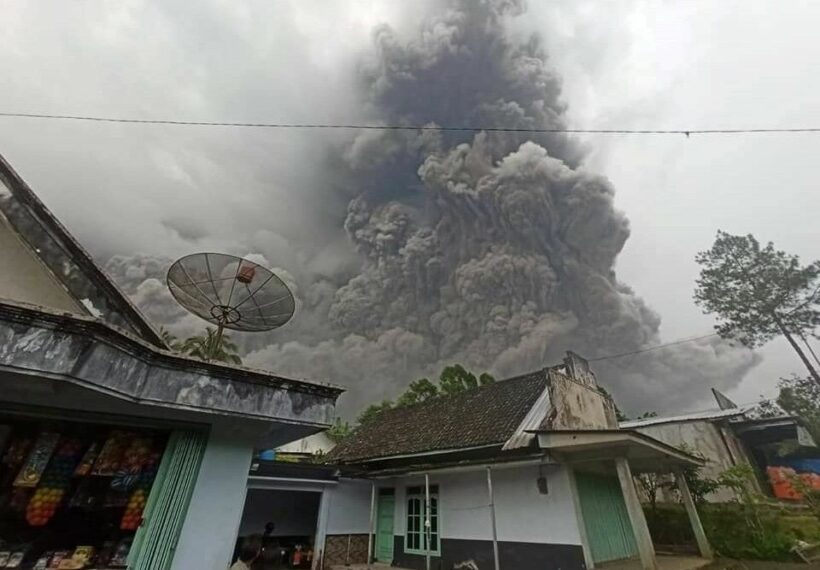 At least 14 people have been killed by the volcanic eruption of Mount Semeru in Java, Indonesia, according to an AFP report. Rescuers continue to search for survivors in villages that lie covered in molten ash. In the district of Lumajang, East Java, houses have been submerged and livestock smothered to death in at least 11 villages.

At least 10 people have been rescued from surroundings areas. The eruption has left at least 900 people homeless and taking temporary refuge in schools, mosques, and village halls, which are now operating as rudimentary shelters. Officials have sent in food, tarpaulins, face masks, and body bags. Abdul Muhari from the national disaster mitigation agency says at least 57 people have been injured, 41 of whom have suffered burns and are receiving hospital treatment.

According to the AFP report, at least 1 bridge in Lumajang has been destroyed, meaning rescue workers have been cut off from the area. Footage filmed by the emergency services shows the roofs of destroyed houses protruding from a coating of mud. Officials have advised people not to travel within 5 kilometres of Mount Semaru’s crater, with the surrounding air heavily polluted.

The alert for Mount Semaru has been at the second-highest level since its last major eruption in December 2020, which similarly saw thousands of people having to flee and entire villages covered in molten ash.

Indonesia is situated on the Pacific Ring of Fire and experiences frequent seismic activity caused by the shifting of continental plates. It has around 130 active volcanoes. In late 2018, a volcanic eruption in the strait between the Sumatra islands and Java resulted in an underwater landslide, which caused a tsunami that killed over 400 people.

spicy_girl
So sad, near my father’s hometown.