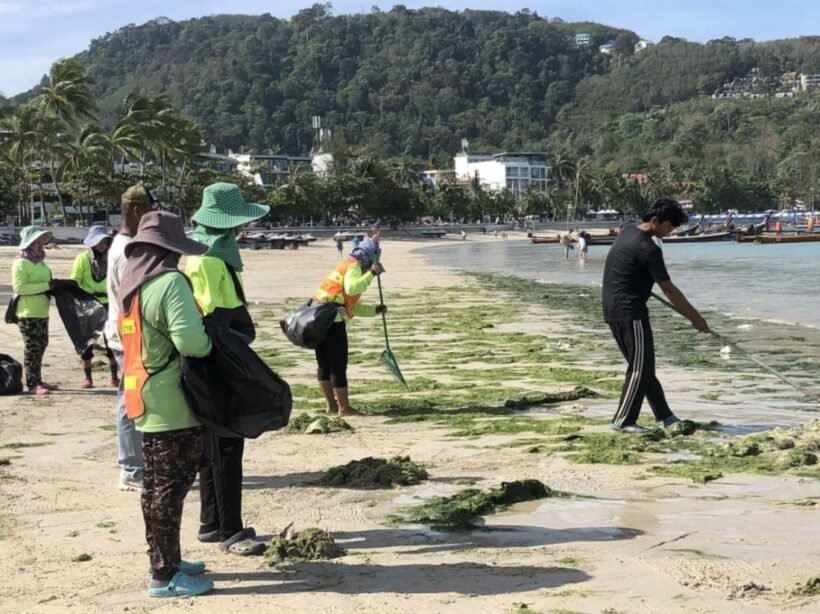 The seasonal mass of seaweed that was washed up onto Patong Beach over the last week is a natural phenomenon. A spokesperson for the Phuket Marine Biological Centre says that the seaweed isn’t harmful although it can smell bad as it starts to rot in the daytime sun. The seaweed first started coming ashore back on January 10.

The seaweed on Patong Beach has forced the Patong municipality into action and a big clean-up operation has been underway.

Officials had a backhoe and industrial equipment on the beach yesterday and today removing the offending seaweed from the popular tourist beach. Municipal employees were also removing much of the material by hand. They were out in force last week as well when the first clumps landed on the shores of Patong Beach.

The Phuket Marine Biological Centre says the seaweed is a seasonal phenomenon and nothing to be worried about. They say that wave action has removed some of the seaweed from the seafloor off the Patong coastline and dumped it on the beach.

Swimmers and tourists didn’t seem to mind the seaweed and have been swimming and enjoying the beach anyway.