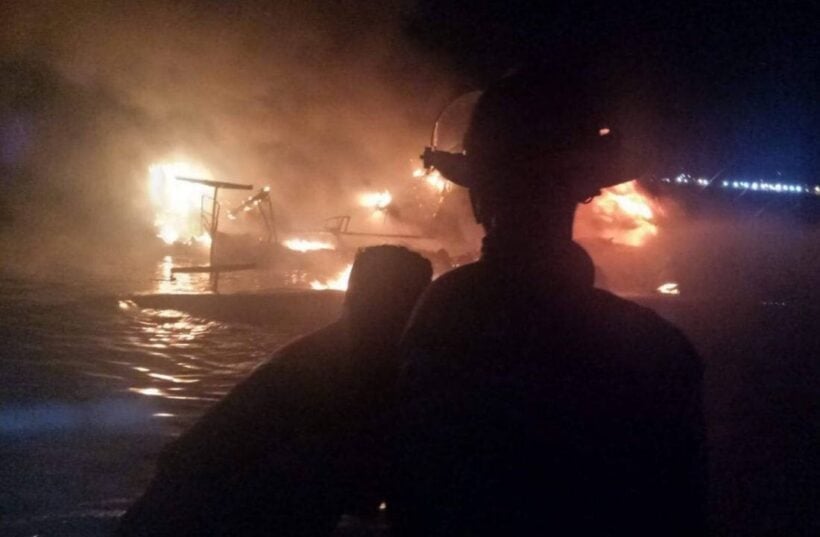 A fire has destroyed a luxury yacht moored off Patong Beach last night. The Australian yacht owner called for help before escaping from the fire engulfing the vessel.

Patong Police were notified that the yacht, which had been moored off Patong Beach, caught fire around 9.20pm.

Firefighters arrived near the Coral Beach Bridge which is 500 metres south of the main Patong Beach. The fire was already ablaze.

Firefighters went on a speedboat together with water pumps. It took 30 minutes to quell the fire but the yacht was already totally destroyed.

Patong Police report that the catamaran yacht was named ‘Soraya’ and cost about 300,000 Australian dollars . The owner is 63 year old Brian Derek, an Australia national.

Mr Derek lived on the yacht. While he was cooking and putting cooking oil into a pan, the yacht was swaying. Mr Derek said he lost his footing. Cooking oil splashed out of the pan and started the fire in the galley of the yacht. The fire also ignited the flooring of the area and started spreading. He tried to use a blanket to put out the fire but failed as the fire took control.

He called for help as people on a nearby boat used to his help and took him off the burning yacht before the firefighters arrived.

Officer provided a place for Mr Derek to stay last night and informed the Australian consulate. Forensic Police are investigating the incident.