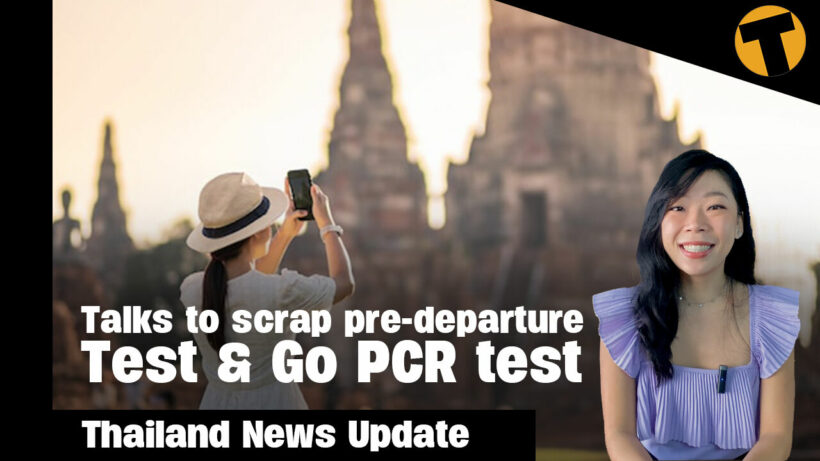 Thailand’s Public Health Ministry is set to make a proposal to scrap the pre-departure PCR for Test & Go travellers, making entering the country at least a bit easier convenient and less expensive.The proposal will need to be approved by the CCSA, which will meet again tomorrow and is expected to discuss a number of topics, including possibly lifting the mask mandate and allowing bars to open. But these are just the proposals to be discussed… not final decisions yet. Officials are set to discuss the pre-departure PCR Covid-19 test, which is currently required 72 hours before travel to Thailand. Thai media adds that officials are also discussing reducing the required health insurance from US$20,000 to $10,000.But the on-arrival PCR test and Day 5 self-administered ATK test aren’t up for discussion it seems. The 10 day quarantine for unvaccinated travellers also appears set to stay in at least the short to medium term.Reports also suggest officials will discuss declaring Covid-19 as an endemic once there are more updates from the World Health Organisation. But the timeline still plans a July 1 date to declare Covid-19 endemic although there will be staged relaxations of restrictions along the way. Even the mask mandate might also soon be lifted, possibly starting with public parks.The CCSA usually leak a lot of the proposals and then end up passing them in their bi-monthly official meetings chaired by the Thai PM. We’ll confirm any of the latest proposals as soon as we know on thethaiger.com

Police have raided a bar in Bangkok’s Nana area and found that at least three teenage girls were offering sexual services. Two were 15 years old, another just 14. A woman at the bar was arrested on child sex trafficking charges. Officers raided the 789 Bar on Sukhumvit Soi 7 in the Nana area, a popular redlight district known for its go-go bars catering mostly to foreign men. Other bars reportedly open in the area promptly closed when the police showed up. Officers say they found that the girls could be taken out of the 789 Bar to provide sexual services. The Dhamrongdham Centre, operated under the Ministry of Interior, recently received a complaint from the Operation Underground Railroad, that girls under 18 years old were brought to the bar to offer sex services. Police say they discovered that an agent, identified as a woman named Ratchada, hired underage girls to work at the bar. They were responsible for taking care of both Thai and foreign customers, entertaining, and advertising products in the bar. If any customers were interested in the girls, they could pay the bar to take them out for paid sex. The alleged agent was charged with human trafficking, sex trafficking, encouraging children to commit crimes, and opening a bar without permission. The teenage girls were taken away by authorities and will be supported by state welfare services who will contact their families.

Less than 24 hours after PM Prayut Chan-o-cha arrived on the first flight into Betong International Airport to chair the opening ceremony, all scheduled flights in and out of the airport have been suspended. At present, it is not even possible to book flights in or out of Betong and it is not yet known when flights will resume. The Tourism Council of Thailand, Nok Air and ticket sellers will meet again on March 21 to discuss the future of flight schedules at Betong airport. The newly established commercial air hub is just 10 kilometres from the Malaysian border and was to be a convenient new way to get in and out of the region which is mountainous terrain and a slow road trip. Yesterday, following all the hoopla earlier in the week when the airport was officially opened, Nok Air issued a statement apologising for cancelling the scheduled flights between Betong and Don Mueang.They said they’d only sold 11 tickets for travel on March 16 and only four tickets for March 18. They said that, due to high operating costs, it was not viable for the airline to go ahead with the flights. Only 10 passengers were aboard the first flight into Betong airport on March 14, including PM Prayut Chan-o-cha, who chaired the airport’s opening ceremony.While the government hoped that the opening of Betong airport would increase tourism to the three Southern border provinces, violence caused by the Southern insurgency which began in 2004 is still ongoing. The UK, US and Australian governments still advise against all but essential travel to Pattani, Yala, Narathiwat and Southern Songkhla province due to high levels of violence in the area.

Whilst we’re on the many changes to air travel in the region, AirAsia plans to resume international flights from Malaysia to Thailand, with 3 new routes opening in April and May. The three new routes include Penang-Bangkok and Kuala Lumpur-Hat Yai on April 13, and Johor Bahru-Bangkok on May 3. In an effort to provide passengers with more options to travel to Thailand under new VTL schemes, AirAsia also plans to increase the number of flights to Bangkok beginning April 12. These will be in addition to the existing Kuala Lumpur-Bangkok and Kuala Lumpur-Phuket flights operated by AirAsia Malaysia.

Stray dog, or son dog, populations have been a longstanding issue in Thailand, but a flower seller at a market in the central province of Samut Songkram saw a way to make the dogs a part of the community and created a project to help take care of the soi dogs in the area. Now each dog has a name and gets a fancy colour-coded collar to indicate if they are friendly or aggressive. The collars were put on each of the soi dogs around the Meaklong Market to identify the mood of the dog and give customers a guide if they should approach them or not.Green collars show the dogs are friendly with everyone, yellow shows the dogs only allow people they know to pet them, and red is for aggressive dogs that should be left alone. A sign is also set up at the market to inform visitors.A pendant with a QR code is also on each collar, showing the dog’s name and contact information if the dogs causes any problems with people. Most of the phone numbers direct people to Neung Ngamsanga, who started the project.Nueng owns a flower shop in front of the Somdej Phra Phutthaloetla Hospital near the market. He is a dog lover and also lets his dog play together with stray dogs in the community. He organised for all the local soi dogs to get vaccinated and sterilised. He then gave them each a collar according to their personalities. He noted that many people, including authorities, don’t care about stray dogs. He says that if stray dogs live their lives happily, people in the community would also be happy. The Thaiger is a supporter of the Soi Dog Foundation, based in Phuket.

1,000 Thais register to apply for jobs in Saudi Arabia