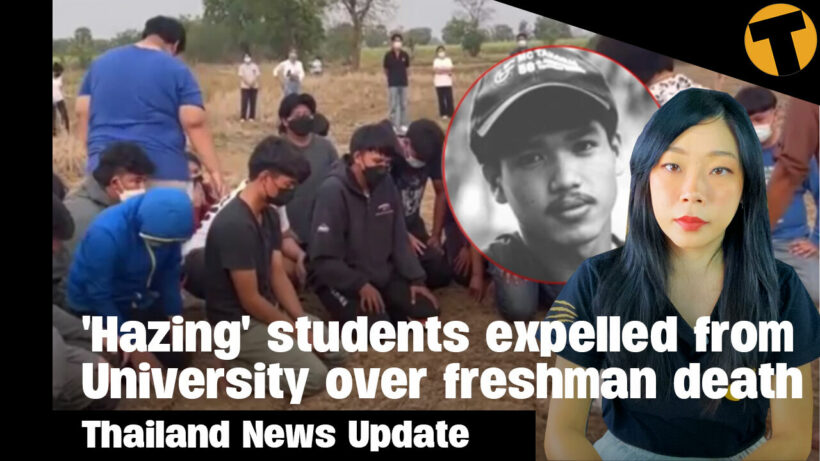 15 senior Thai university students, involved in the violent and fatal hazing of a first year uni student on March 13, have been dismissed from the Rajamangala University of Technology Isaan. The ritual involved a total of thirty 2nd year students and 37 freshmen, and resulted in the death of 19 year old Padyos “Prem” Chonpakdi.10 other students, involved directly with the fatal ritual, will have their exam results for the past semester invalidated. The university had resolved to dismiss 15 of the 2nd year students for co-ordinating the hazing, plying Padyos with alcohol which he was forced to drink, and then beating him until he became unconscious. Padyos was lured to a football field after being told that they were all going to play football. The young man died on the way to the hospital. The University’s actions have no impact on any future criminal proceedings that may be brought against the perpetrators, all over the age of 18 when they committed the crime. For his part. The 55 year old father of Padyos, Ekachai Chonpakdi, has already rejected a 400,000 baht offer from the University’s alumni, or an additional 500,000 from the families of the 7 ring leaders, stating that he intends to take the matter to court. In another effort of compensation, the University says they would provide scholarships for Padyos’s girlfriend Phimphan, who is 2 months pregnant, and for the dead student’s younger sister, who is now in Grade 4. The scholarships would provide access to University education allowing them to complete bachelor’s degrees. Padyos Chonpakdi was cremated at Wat Noi in Nakhon Ratchasima last Monday.

While the largest percentage of Thais, 27.6%, said in a poll that “no one” is suitable to be the PM, Move Forward Party candidate Pita Limjaroenrat is slightly ahead of current PM Prayut. 13.4% of respondents prefer Pita, while 12.6% prefer the current PM Prayut. This means that Pita is now the country’s most preferred candidate, followed by Prayut, then Paethongtan Shinawatra of the Pheu Thai Party, former PM Thaksin’s youngest daughter, and then Khunying Sudarat, leader of the new Thai Srang Thai Party – all representing opposition parties to the current government The poll was conducted over five days from March 10-15. Respondents were Thais from across the country 18 years old and above. Thailand’s ruling military-backed government forced the popular and progressive Future Forward Party to dissolve in 2020. Former members of the party then formed the Move Forward Party. Then in the summer of 2020, a wave of protest movements began among Thailand’s university students, and eventually expanded into many parts of Thai society. For the first time, matters of the Thai monarchy and its role in the Thai constitution were openly discussed in political circles and widely on social media.

A foreign man in Pattaya was left bleeding from several serious injuries in what witnesses say was an altercation with security. Witnesses found the man lying on the ground in the middle of Pratumnak Soi 5. The altercation allegedly happened the night before in front of a so-called ‘restaurant’… a former bar that had been converted into a faux restaurant to skirt around the current Covid restrictions. As the man lay on the ground, a few other foreigners directed traffic and checked on him while waiting for emergency rescue services. Emergency services then took him to a hospital. The man’s name has not been reported, however, he is reportedly about 50 years old. There was no further information about what may have caused the incident, and the bar-come-restaurant wasn’t named.

Still, in Pattaya, City Police report that they’ve arrested a ‘restaurant’ manager for allegedly selling alcohol without a permit, opening a venue without a permit, and breaking the Chonburi Disease Control Orders. Only former bars and clubs that have been converted into ‘restaurants’, have proper certification, and are approved by authorities are allowed to operate. Alcohol can be served until 11 pm under the current guidelines. Police took the manager to the Pattaya Police Station. The incident is just the latest in a long line of arrests over errant bars that have been trying to re-open under the current seat of guidelines. Earlier this month the Pattaya Association of Entertainment Venue Operators demanded that local Chin Buri authorities allow venues to remain open until 1 am, not the current 11 pm. The secretary of the association says business operators must immediately hold talks to plan ways to attract tourists back since some neighbouring countries have scrapped quarantine requirements to attract tourists.

Local residents have found a man’s dead body floating in the waters off Phuket’s east coast and caught in the mangroves off Koh Kaew. Phuket City Police, hospital staff, and a forensic expert rushed to the scene. After taking the body out of the water for examination, they identified the man as Sahat Bunchan. He was 59 years old and from the southern city of Nakhon Sri Thammarat. The responders took Sahat’s body to Vachira Phuket Hospital for an autopsy. Police say there weren’t any injuries on Sahat. Police did, however, find a plastic bag with cash and personal papers near his body. The man was fully clothed and wearing a medical face mask.

A gas pipe has fallen on a construction worker in Rayong, killing him. A backhoe that was supposed to lift the pipe couldn’t handle the pipe’s weight, and the pipe fell into a ditch where three workers were connecting the gas pipes. Two workers managed to jump out and narrowly escape, while one was unable to escape. The pipe fell on him, and he became trapped under layers of mud dug in the ditch. The other workers rushed to help the victim but were unable to revive him. They immediately alerted rescue workers and police. A police lieutenant said the accident happened at an industrial estate road in tambon Map Ta Phut in the main Rayong city area. The worker was killed just one day after another worker was killed when a large steel pipe fell on him on Friday. The worker killed on Friday worked at another part of the same industrial estate.

BillO
In addition to being sent to prison for the rest of their lives, they have dishonored and disgraced their entire families for generations to come.