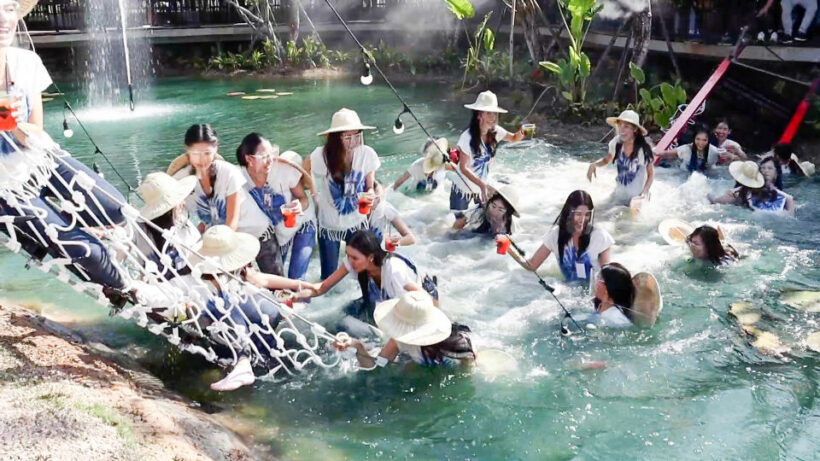 Luckily no one was hurt but these Miss Thailand beauty queens ended up with an unscheduled dunking whilst parading for the cameras in Chiang Mai.

A video captures the face-masked girls, all dressed up in the day’s casual uniform, posing for the cameras and the the moment a bridge snaps, plunging the 30 smiling, but bemused, Miss Thailand contestants into a dirty pond.  3 of the girls were injured, with 1 suffering cuts and bruises on her forehead. 2 others ended up with minor scrapes. They were all pulled out and rushed to the hospital for a quick checkup but were discharged by Monday evening.

The whole moment was caught on camera on Monday morning as part of the second day of the competition in Chiang Mai, Thailand. The contestants visited a cafe to pose for pictures on a suspension bridge constructed from ropes connected to a steel walkway. The engineer for the bridge was unlikely to ever have considered 30 fit young ladies all standing on the bridge at the same time.

But the printed white T-shirts ended up as part of a spontaneous wet T-shirt competition. 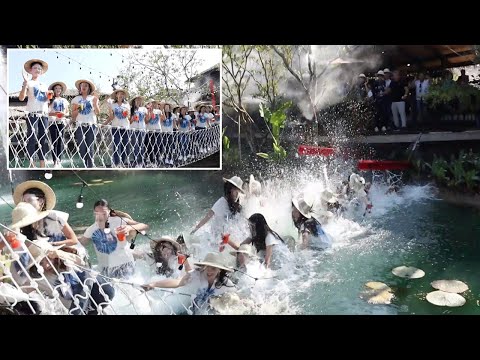 But their combined weight sent them them all crashing into the water below.

The 43 year old owner of the restaurant, and proud owner of the previously pretty little suspension bridge, promised to cover all the treatment costs for the injured ladies. He donated 500,000 baht to cover their medical bills.

”I’ll also pay for the other contestants to have their dresses cleaned professionally. I don’t know why the bridge broke. It is strong, but it just could not handle the weight of the women. In the future, we will make improvements to the bridge to be even stronger.”

The remaining 27 pageant hopefuls will continue on their campaigns for the Miss Thailand crown, but 3 will be sitting it out as they recover from their “interruption”. They will be back in action, no doubt smiling and waving, later today.

Dr. Adisorn Suddee, director of the Miss Thailand 2020 event said that the contest is normally held in Bangkok.

“This time we chose Chiang Mai and we were confident that it would be safe and secure. This was the second day of the contest, and it was unexpected that the bridge would break.”

Whilst the format has lost favour in the west, beauty pageants are a booming industry in Thailand, with events held regionally and nationally throughout the year. There’s even a Miss Tiffany pageant for transgender women which is highly popular in the Land of Smiles. 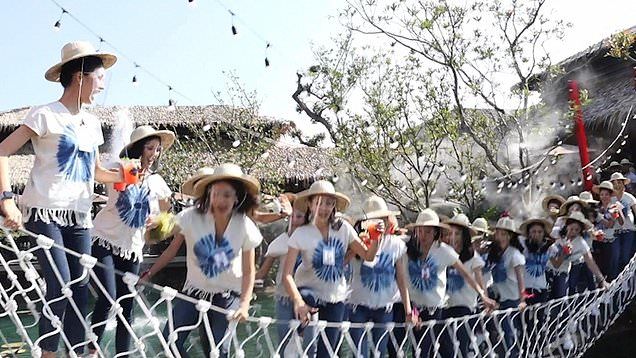