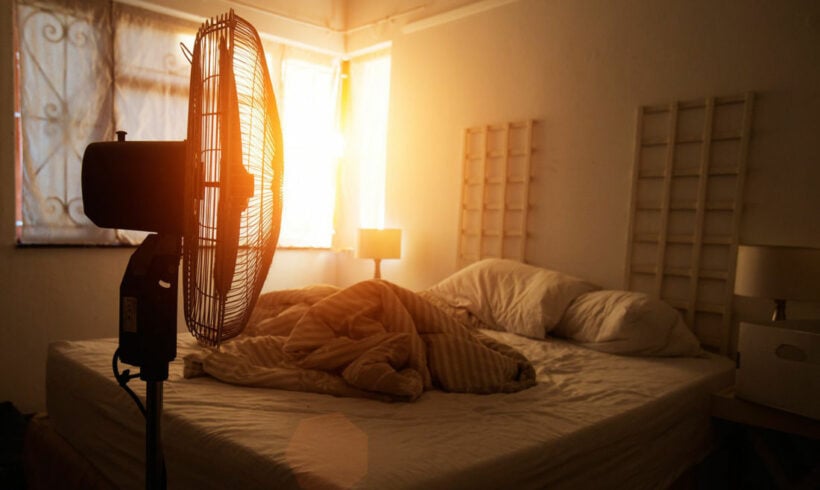 How do you get a good night’s sleep in Thailand? Do you sleep with the air-con, leave the windows open (with fly-wire screens!), turn the air-con on before you go to bed to cool down the room? Or do you use a fan?

A new story from life.gomcgill.com suggests that sleeping with a fan could actually be dangerous to your health.

According to the article, a lot of people love running a fan during their sleep because the fan helps in making them sleep better. And other people love hearing the fan’s sound because it distracts them from other noises that may be keeping them awake. This calming ‘background’ noise is called ‘white noise’ and is also used by many sleep Apps to provide sounds to help you sleep.

Reports have emerged of the general notion that sleeping with the artificially-produced wind blasting in your face is probably not good for you. This is quite separate from the Korean myth about ‘fan death’…

Fan death is a well-known superstition in Korean culture, where it is thought that running an electric fan in a closed room with unopened or no windows will prove fatal. Despite no concrete evidence to support the concept, belief in fan death persists to this day in Korea, and also to a lesser extent in Japan.

According to some findings, there are many reasons you should try to stop leaving your fan on while you are sleeping. Fans might exacerbate a lot of health problems that you have no idea about, although you may have experienced a few if you frequently leave the fan on and go to sleep.

Some people wake up the next morning feeling some of the symptoms that the fan’s air causes. People with allergies and asthmas often wake up with an irritating sensation in their noses when they’ve had the fan directed right at their faces all night long. Whatever was in the air causing their allergies is now blowing straight into their face.

livescience.com reports that anything causing rapid air movement, including a fan, can evaporate moisture from your mouth and nasal passages, causing dry eyes and clogged noses. Fans may also circulate dust, which could bother people, particularly if they have allergies. The circulating air will also contribute to drying out your skin.

• Keep the room clean and free of dust. Whatever is lurking in the room will be stirred up and blown into your face.

• Try and avoid having the fan blowing directly onto your face, avoiding some of the drying effect of a direct stream of air onto your nose, mouth and eyes.

• A weaker fan setting, further away is better than a smaller fan blasting a metre away from your face. Ceiling fans, larger with a slower rotation, will be better.

• Keep your fan blades clean. In the humid climate dust particles will accumulate on the blades and blade protector.

• Keep hydrated if you use a fan whilst sleeping with some water nearby to have a quick sup if you wake up during the night.