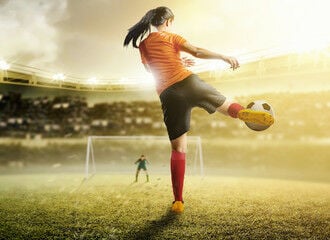 Australia now leads Group B of the FIFA Women’s World Cup after players Emily van Egmond and Sam Kerr scored two goals against Thailand, beating Thailand 2-1. Thailand still made it to the quarter-finals as a third-place team, along with Vietnam. Up next, Thailand will play against Japan in the quarter-finals on Sunday. Thailand started the cup this Monday, losing its first game against the Philippines. Thailand then beat Indonesia 4-0, also on Monday.

Thailand’s game against Japan will start at 3pm on Sunday. Japan is at the top of Group C after a 1-1 draw with South Korea, who are second in Group C. The Thai team is confident about their place in the cup this year, even though it’s still improving on some mistakes, said coach Miyo Okamoto. After the team lost to the Philippines, Miyo said players need to work more on their offensive skills, and not just keeping the ball on their side. The players have worked on their skills by studying the Philippines team’s tactics, she said. The team hopes that player Chaba Kaew will help it qualify for the 2023 Fifa Women’s World Cup.

The top-five teams and co-host Australia will represent Asia at the 2023 World Cup. Two sides from the Women’s Asian Cup will compete in the 10-team playoff tournament which offers three more spots in the finals.

Even though Thailand lost against the Philippines and Australia, its skills are noticeably ahead of Indonesia’s. The Indonesian coach said the Thai players were ahead of his in their fitness levels, and also control and decision making. The coach told the Bangkok Post, “Thailand has the experience of playing in the Fifa World Cup but we have another two matches to play and we want to make an impact. Our players, especially the younger ones, have to try and control the game.”

This year’s cup is hosted in Mumbai, India.