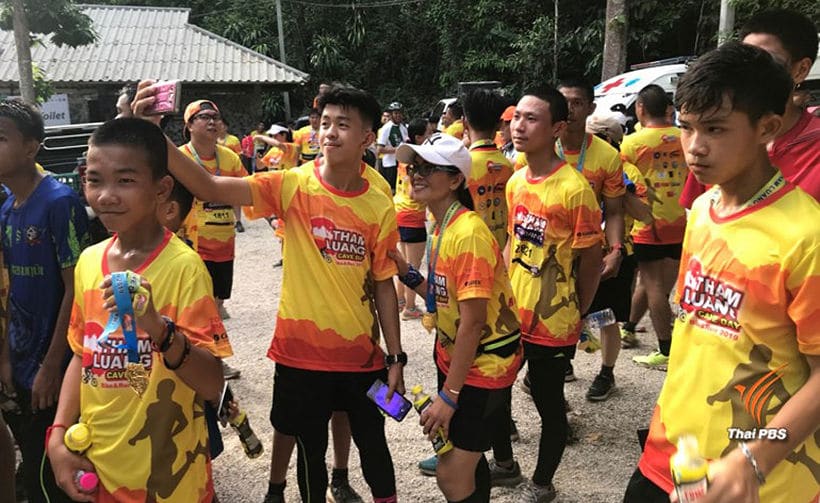 Thousands of locals plus tourists, along with some of the key players in the search and rescue of 13 Mu Pa (Wild Boar) footballers trapped in the flooded Tham Luang cave in Chiang Rai’s Mae Sai district, celebrated the first anniversary of the day the team stumbled into the Tham Luang caves setting off the epic drama that followed.

On June 23 last year the 13 young men plodded innocently into the mouth of the Tham Luang Cave not knowing that a downpour would trap them inside.

Activities around Chiang Rai kicked off with a 10 kilometre mini marathon, a 6 kilometre fun run, plus a 20  and 54 kilometre cycling contest.

Among VIPs attending were the Phayao provincial governor Narongsak Osotthanakorn. He was the man who ended up being the official face of the mission last year when he was governor of the Chiang Rai province. He would front the world’s media each day as the story grew passing on any information he had.

The widow of Captain Samarn Kunan, the former SEAL member who died during the dangerous rescue operation also attended along with local cave diver Vernon Unsworth who provided so much intel about the local cave system as the mission to find the missing team members started.

Before the morning runs, a religious ceremony was held in front of the Tham Luang cave complex and at the statue of Samarn Kunan to pay respects to the ‘spirit’ of the dead SEAL member.

A few short speeches recalled the monumental global effort, luck and ingenuity that combined to find and bring out the 13 team members alive. Third Army region commander Lt-Gen Chalongchai Chaiyakha said the mission demonstrated “the true spirit of human beings who spontaneously came together with one single determination, to help the 12 trapped boys and their coach and to bring them to safety”.

The team became trapped in the cave after it flooded. They went inside the Tham Luang caves following a training session on June 23 last year. A massive rescue operation, involving cave divers, cave climbers, water drainage experts and many other rescue experts from several countries, as well as thousands of Thai volunteers, was mounted.

All 13 were safely brought out from the cave between July 8-10 in a risky extraction mission.

More about that, more reflections on the events 12 months ago and a great video tribute HERE.

Miracle at Tham Luang – The Thailand cave drama unfolds, a year on