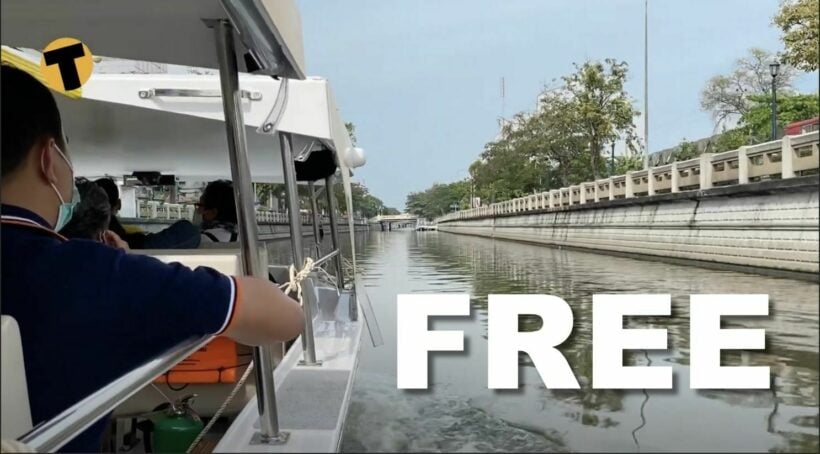 You can still go on a completely free ride along the Khlong Phadung Krungkasem, that’s a canal that runs through some of Bangkok’s most historic areas.

The Thai PM launched the new ‘green’ canal boat services at the end of November 2020. The service is operated by the Bangkok Metropolitan Organisation.

As a bit of background the canal ferry boats or Khlong Ferries are traditional long-tail boats with large, noisy and dirty deisel engines. They run services right around Bangkok through some of its traditional canals that link to more modern public service options like the BTS and MRT.

The Khlong ferries are a popular way for many people to get around the city and are packed each morning and afternoon for the daily office commute.

Long term the BMA says they want to replace the older style diesel ferries with electric or lower-polluting options. The Khlong Phadung Krungkasem electric boats are a trial service to check the reliability and popularity of an all-electric boat service. Certainly, they’re very quiet.

There’s a total of 11 piers along the 5 kilometre route and it operates from 6am to 7pm daily. The service runs from the Hua Lamphong Railway Station Pier to Thewarat Market Pier, linking two sections of the Chao Phraya River that winds past the historic Rattanakosin island.

The 7 electric fibreglass boats in the new fleet can each carry 30 passengers, and also allow for one wheelchair on each vessel.

The boats can run for four hours on charge and operate up to speeds of 15 kilometres per hour. They each have 12 solar roof panels to help power the motors and are equipped with a tracking system and security surveillance cameras.

Just looking at the new electric ferries it’s quite clear that they lack the pure diesel grunt, power or speed to replace the larger ferries that ply some of Bangkok’s other canals. But the electric technology is moving fast.

With electric cars, the newer models are already giving even the fastest conventional petrol engine spots cars a run fo their money. A similar leap in technology and practicality will be needed to provide a useful replacement for the larger khlong ferries if the BMA is looking to replace the older-style ferries.

After the free service period finishes in May a 10 baht fare will be charged for the entire trip. We’d recommend a trip to Rattanakosin Island to enjoy a freebie, courtesy of the BMA, to check out the new electric ferries.