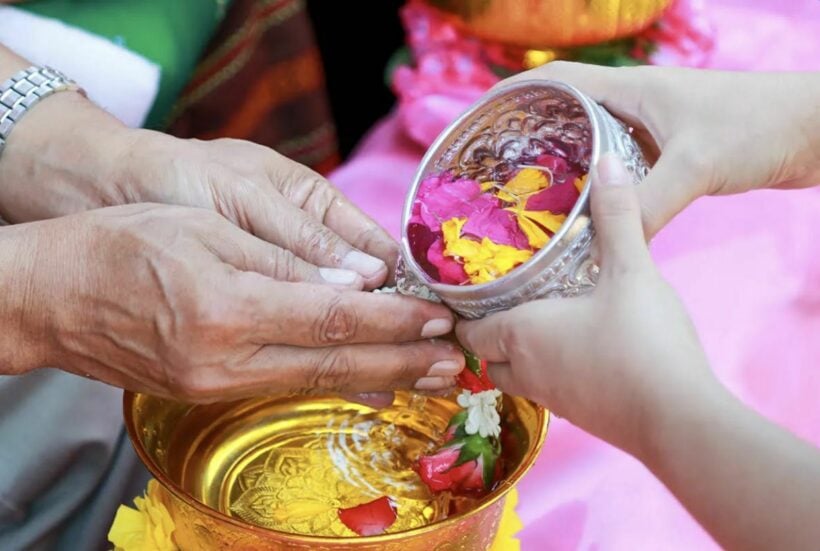 Pouring water on the hands of revered elders is a Songkran tradition in Thailand. Credit: Agoda

Songkran, or the Thai New Year, is the the largest and most famous of Thailand’s many traditional festivals. Known for huge water fights and water blessing ceremonies, it’s been celebrated for centuries and is rich in culture and tradition. Every year, the celebrations begin on April 13 and normally last three days until the 15th of April.

The name was inherited from ancient Sanskrit, a language that dates back thousands of years. Songkran combines the words “Song” and “Krant” and refers to the sun beginning a new Zodiac sign. Songkran translates to “entering” and “stepping into.” It’s when the sun exits the sign of Pisces and enters the sign of Aries. “Songkran month” is the event that occurs every month. But according to astrology, when the sun reaches Aries again after 12 months have passed, it’s known as “Songkran year” and will be the solar New Year’s Day.

The festival is highly dependent on water, which symbolically washes away the previous year, allowing people to prepare for the new year. It’s also a time of family reunion, when relatives who have moved away return for the holiday to spend time with their loved ones. During the festival, various traditions are celebrated; but the one tradition it’s most famous for is water splashing. Thai locals and travellers alike drench each other with water using hoses, squirt guns and any other water carrying container.

Locals believe that water is purifying and cleansing: it washes away negativity and problems, and brings good fortune and happiness. According to tradition, the festival began with villagers collecting water that had been poured over Buddha statues for purification. This was then used to bless leaders and family members who were well respected by sprinkling it over their shoulders. A similar tradition continues today with the water blessing ceremony, in which people fill shells with purified water and pour it on the hands of their elders as a sign of blessing and respect.

Songkran is a festival in which family members gather to express gratitude, love and respect, as well as to make merit and pay respects to their ancestors. Giving food to monks is a way of gaining merit. Visiting temples and listening to Buddhist speeches are also both considered a blessing during Songkran. Thais go to temples to pray and bring food to the monks. Locals splash scented water on Buddha statues when visiting different places. Many people also like spreading positive vibes by releasing caged birds into the sky or fish into bodies of water. This occurs throughout the country.

The northern city of Chiang Mai hosts the largest Songkran celebrations, with some events reportedly lasting six days. The infamous Khao San Road is the obvious centre of activities during Bangkok’s modern Songkran festival. The atmosphere in the backpacker zone is electrifying.

In a normal, non-pandemic year, it’s hard to leave your accommodation, whether a hotel or a condo, without experiencing the water soaking chaos and any resistance will quickly fade. On the streets, you’ll find multiple generations getting in on the fun, including children, adults, the elderly and trucks full of teenagers blasting loud music.

Songkran is a national holiday in Thailand. It’s a time for locals who have relocated to other cities or towns to return home and spend time with their families. So if you’re travelling to Thailand during this time, it’s smart to plan ahead because public transportation tends to be packed and accommodations fully booked — at higher than normal prices.

Looking to travel somewhere in Thailand this Songkran? Quickly book your flight on Skyscanner to get the best deals!

Ramanathan.P
Do take note 14th April is the Tamil New Year. It is the 1st Day of Tamil Calendar for centuries. In Southern India some places it is also called as "Sangaranthi" in rural areas
Grumpyoldman
I'm sorry but I don't believe this article. The government say Songkran is just a commercial invention. Surely we should believe them?

Songkran: Where to celebrate the Thai New Year in Thailand 2022