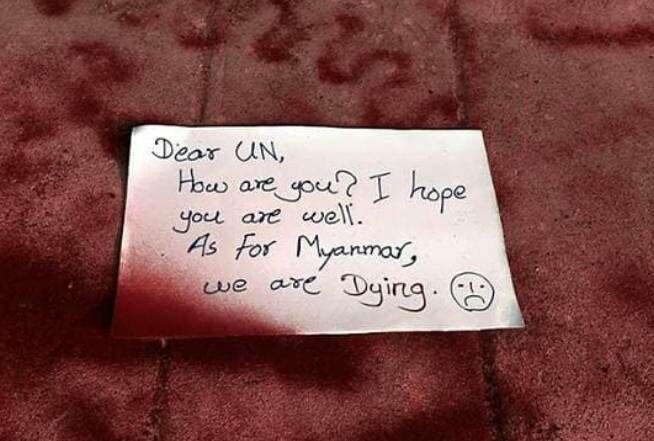 A note from a protester on the streets of Yangon: “Dear UN, How are you? I hope you are well. As for Myanmar, we are dying.”

Marking over 700 deaths in the Burmese military crackdown, anti-coup protesters in Myanmar are splashing red paint across the streets of Yangon to represent the blood of those killed in the growing crisis. Myanmar has ground to a halt as the military junta attempt to silence opposition to their February 1 takeover with deadly force. 714 deaths have been verified by local monitoring groups, but they warn the actual number may be much higher.

The economy and daily functioning of the country is immobile, the internet has been cut off to many citizens, even Myanmar’s Thingyan New Year festival, similar to Thailand’s Songkran holiday, has been cancelled. Instead of water fights in the street, protesters explained they used the holiday to draw a parallel, splashing red paint “blood” instead to draw attention to the Burmese deaths at the hands of the military.

“The purpose of the “bleeding strike” is to remember the martyrs who died in the struggle for democracy. We should not be happy during this festival time. We have to feel sadness for the martyrs who are bleeding and we must continue to fight this battle in any way we can.”

Simple but powerful signs and notes were found amongst the blood protest with phrases like, “blood has not dried on the streets,” “overthrow the era of fear,” and “hope our military dictatorship fails.” Perhaps most poignant was a note found on red-painted streets reading, “Dear UN, How are you? I hope you are well. As for Myanmar, we are dying.”

The UN fears that a Syrian-style conflict is around the corner for Myanmar, calling on countries to take immediate steps against the military junta, citing possible crimes against humanity. High Commissioner for Human Rights Michelle Bachelet draws the Syria comparison, worried a full-blown Burmese civil war could parallel the Syrian war that has led to 400,000 deaths and 6 million refugees. While some countries have enacted sanctions, infighting has delayed meaningful action with the EU claiming Russia and China are blocking possible UN arms embargos.

Meanwhile, the military added many more people to the list of over 260 people including doctors and celebrities they are seeking to arrest for crimes such as spreading dissent or treating injured protesters. 7 protesters in Yangon, 3 in absentia, were sentenced to death for the alleged murder of a suspected informant.

In the northwest of Myanmar, a milk delivery couple were killed by military storming the town of Tamu. And in the Mandalay region, protesters drove motorbikes with red flags supporting imprisoned leader Aung San Suu Kyi.