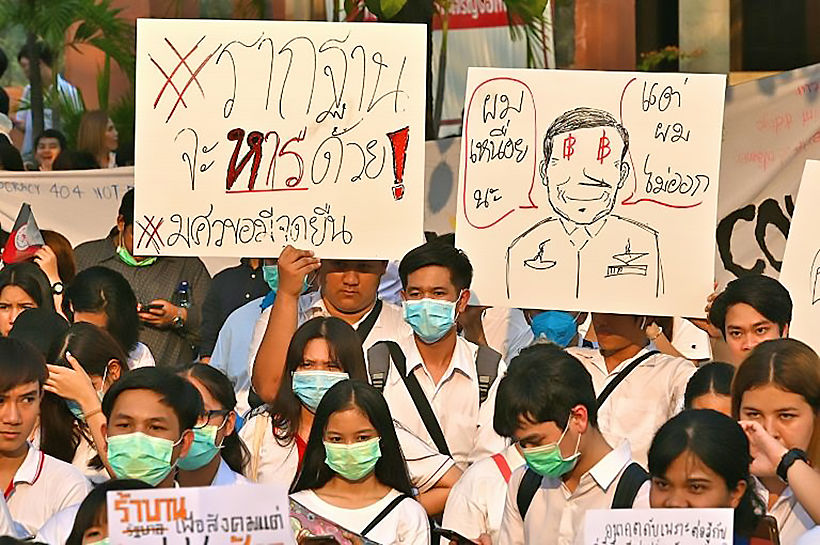 Thai PM Prayut Chan-o-cha has expressed “concern” over growing support for student rallies at universities and now high schools, throughout Bangkok and elsewhere, to protest the recent dissolution of the popular Future Forward party, and the possibility of confrontation and unrest.

The proliferation of political rallies and demonstrations comes in the aftermath of the Future Forward party’s dissolution by the Constitutional Court, starting at universities and now spreading to some Bangkok high schools. It led to the PM telling reporters today that he “understands the good intent of the students,” but that he is “concerned that they might be misled by one-sided information and might be used as a tool as part of political agenda.”

Prayut pleaded with protesting students to keep an open mind to information from the government as well, saying that he didn’t want a repeat of the “coloured political divide and eventual political unrest,” an apparent reference to the violent, sometimes fatal street protests between rival “red-shirt” and “yellow-shirt” factions; violence which shook the years 2008-2010.

He said, perhaps ominously, that core leaders of several rival political groups, whatever their political colours, are now serving prison time or facing trial. The PM said that he holds no grudge against protesting students, but warned that the “instigators” of student protests might face legal action.

This morning, a police team was dispatched to Triam Udomsueksa (University Preparatory) school beside Chulalongkorn University, where about 100 students held a flash mob to protest military dictatorship. Similar events were reported at Satri Wittaya, Suan Kularb and Bodindecha schools.

Triam Udomsueksa school director Sophon Kamol sent a letter to the district educational office explaining that the school had nothing to do with the mob, and did not support the event. He explained that about 4,000 students in Mathayom 4, 5 and 6 were gathered at the school for their traditional union and they had nothing to do with any flash mob.