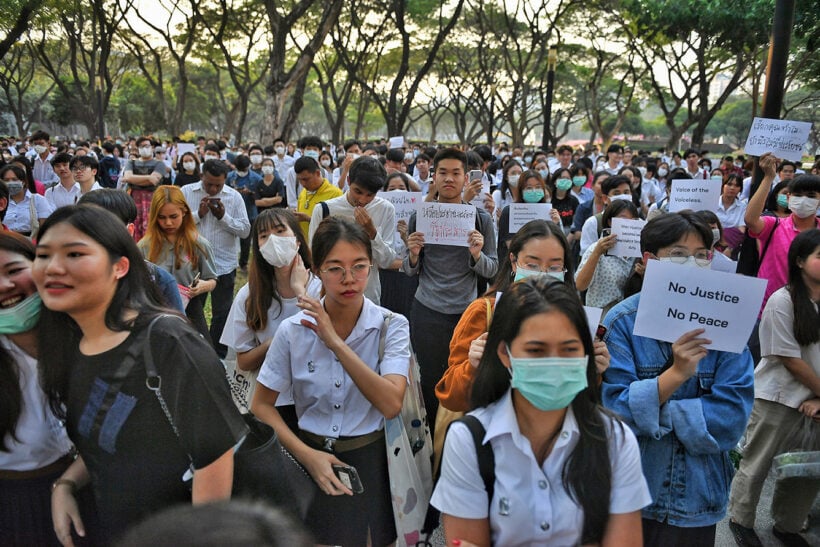 PHOTO: Students gather at a pro-democracy rally against military rule and the Constitutional Courts ruling to dissolve the progressive opposition Future Forward Party, at Chulalongkorn University in Bangkok on Monday - Thai PBS World

“Although public gatherings to make demands or to mount resistance are a democratic right, the organisers and participants are reminded that they must act within the bounds of the law.”

The string of gatherings followed Saturday’s event where groups of students and people joined a rally at Thammasat University.

On Monday at Chulalongkorn University, students led by those from the Faculty of Arts, gathered on campus at 5pm and took turns speaking onstage. At Kasetsart University at about the same time, a large group of students and people gathered to issue a statement.

The statement complained about a loss of freedom and of injustices over the past five years, as well as the arbitrary appointments of cronies of the junta to key positions, which they described as its legacy.

Deputy national police spokesman Kissana Phattanacharoen says police officers, including plainclothes officers, are being deployed to rally sites “to ensure the safety of the protesters and monitor their movements.”

Kissana points out that  prior permission must be obtained to stage rallies in certain locations, while acts done with the intent to provoke unrest are prohibited.