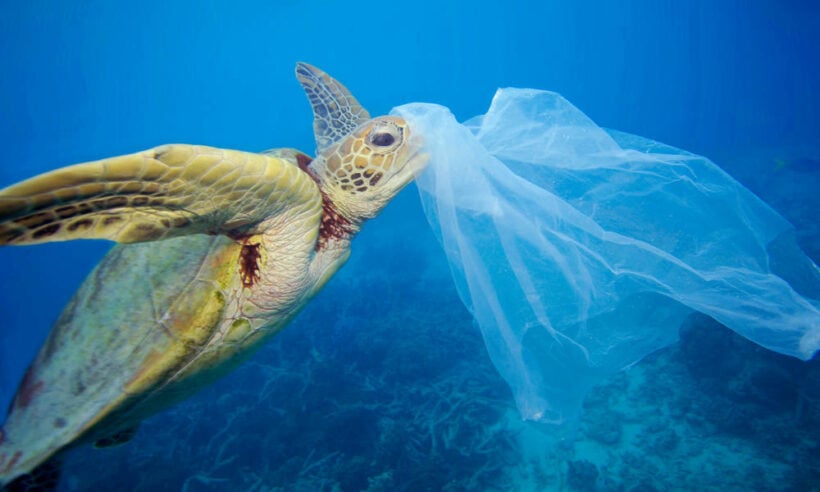 The death of baby dugong Mariam, which was found to be caused from problems associated with plastic bags blocking her digestive system, has brought about renewed calls for stricter control, or a complete ban, on the use of single-use plastic bags.

Marine scientist, and vice dean of the Faculty of Fisheries of Kasetsart University, Dr. Thon Thamrongnawasawat, told Thai PBS that the recent campaigns to reduce the use of plastic bags “was not enough”.

The campaigns, much touted as ‘environmental Community Service Initiatives’, have been perfunctory and, whilst the ‘savings’ in plastic bag use sound massive, they are in a tiny proportion of the actual single-use plastic bag use in Thailand.

The Charoen Pokphand Group, owners of Thailand’s 7-11 franchise, Family Mart stores – 51% owned by the Central Group and 49% by Japan’s FamilyMart Uny Holdings – and Central Pattana, the operators of the biggest number of shopping centres around Thailand, could do a LOT to take single-use plastic bags out of the system but have so far been reluctant to do more than just pay lip service to the problem.

Dr. Thon suggests that single-use plastic bags should be banned, beginning next year, as was done in New Zealand, or a fee should be imposed for their use. He also says that the plan to reduce the use of plastic straws, due to begin in the next three years, should be brought forward to next year.

Dr. Thon admitted that he was shocked to learn about the sudden death of Mariam, and that several pieces of plastic were subsequently found in her intestine. The plastics ultimately resulted in the septic shock that killed her.

He disclosed that members of more than ten rare marine species, including sea turtles and whales, had died this year by becoming entangled in fishing nets or from eating plastic waste, including the case of a pilot whale which was found to have 85 plastic bags in its stomach.

He also cited the case of a leatherback sea turtle, which was found dead on a beach in Rayong province last month. Veterinarians found two plastic bags in its stomach, one plastic wrap for bread and five small pieces of plastic.

“The garbage, including plastic waste, dumped into natural inland waterways find their way into the sea.”

The Thaiger would like to call on Thailand’s main retailers to initiate a total ban on single-use plastic bags.