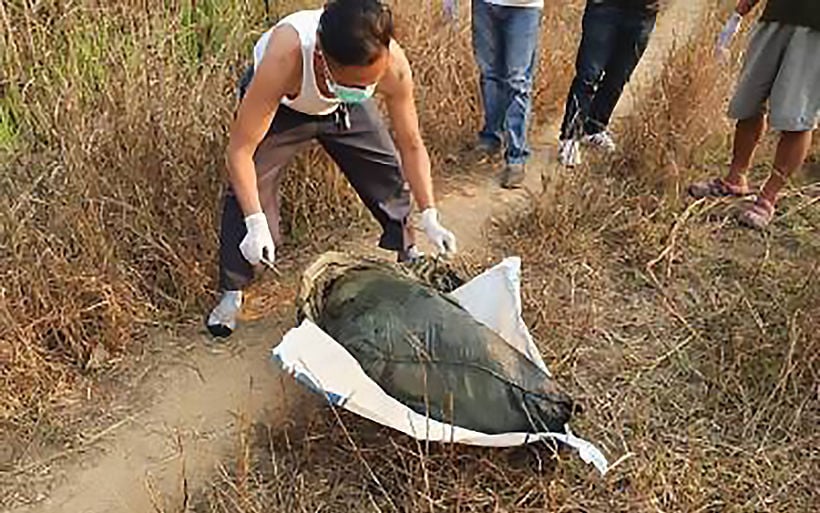 PHOTO: A body was discovered in an oil drum in a Chiang Rai reservoir - Chiang Rai Times

Police in Chiang Rai  discovered a dead body stuffed into an oil drum floating in a reservoir. The 200 litre drum has allegedly been floating in the reservoir for over a week. Investigators learned from local villagers that the oil drum had been floating in the middle of the reservoir since last about March 3. Only when the drum brought ashore did locals call police. Local teenagers, curious of the drum’s contents, dragged it ashore while creating a video for social media.

The drum emitting a terrible smell, and when the teens opened it they discovered the body inside. One of the teens rushed to tell the local headman, who called the Mae Fah Luang Police department.

Investigators along with forensic officers examined the body and found obvious wounds. Upon examining the victims pockets they found drug paraphernalia used for heroin. The victim was dressed in a black jacket and pants. Forensics officers say the victim was also wearing a gold digital watch and a Girl Guides belt buckle.

Forensic police determined to body to be a male, but due its decomposed state they couldn’t determine an age. The body was sent to hospital for autopsy.

Investigators asked villagers if anyone had reported a missing person, but no one came forward. Police also contacted authorities in other districts as the body was found was about 12 kilometres from the Burmese border.

Police suspect the victim may have been involved in a drug deal gone bad.