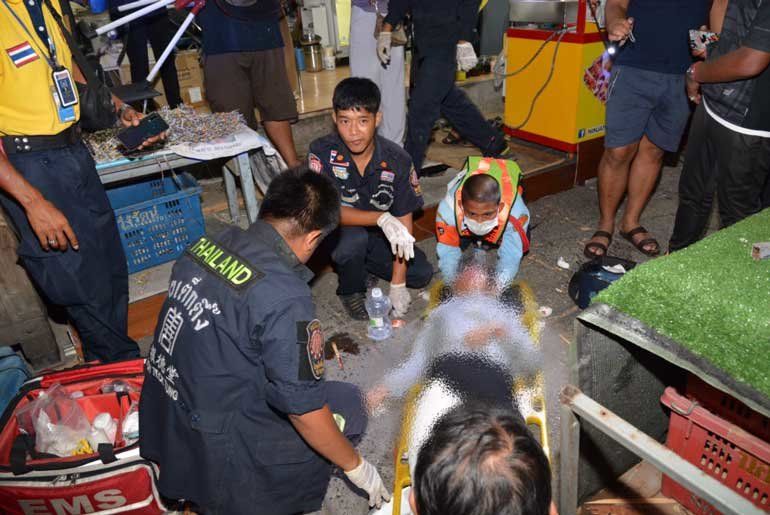 PHOTO: Emergency responders help the woman after the fall - 77khoed.com

Police are still investigating an incident in Nonthaburi, just west of Bangkok. Yesterday at 7:30pm, 30 year old Thanaporn jumped from the 14th floor “from fear of getting arrested by police officers” in a Muang Thong Thani housing estate in Nonthaburi.

Thanaporn was wanted for attempted murder of her sister and two other relatives earlier this month.

Earlier in March she had thrown acid over her elder sister and two other relatives. Rom Klao police department issued a warrant for Room 14/52 on the 14 floor of Building C5, after discovering that the victim was in hiding there.

Fearing being arrested, Thanaporn decided to jump out of a window, surviving with severely injuries to her head and a broken leg. She was rushed to the local Chollaprathan hospital.

39 year old Ratchaneeporn, the owner of the fruit shop, says that she heard the sound of something heavy landing on the awning of her shop. The body of the woman who had jumped, landed on top of a 7-Eleven staffer who was walking past at the time, though fortunately she was only slightly injured.