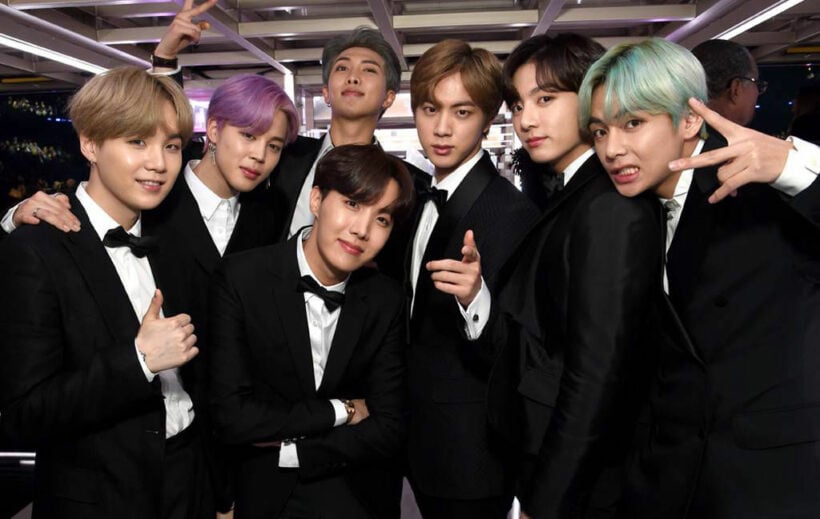 South Korean band BTS is making waves across music charts around the world. Their new album ‘Map of the Soul – Persona’ has matched a long-standing Beatles record of having three number one albums on the US Billboard chart in one year.

The all-male band comprises RM, Jin, Suga, J-Hope, Jimin, V and Jungkook, all aged between 22 and 27 years old. They debuted in 2013 amid the highly competitive K-Pop industry but have been able to break free and become international superstars selling out stadiums around the world, singing mostly in Korean.

BTS visited Bangkok in at the start of April filling the Rajamangala Stadium for two nights, the only band that has ever achieved two sell-out concerts in the massive sports stadium.

At the same time the seven-member band has reached the number one position in the Billboard Top 100 Artists and their candy-coated new single ‘Boy With Luv‘, with US singer Halsey, has debuted at #8 (this week) in the Billboard Top 100 with most music pundits predicting it will hit the number one spot in the next few weeks. The single is in the Top 30 of 35 world music charts this week.

In the 24 hours following the single’s release, ‘Boy With Luv’ broke the YouTube record for the most views in 24 hours, beating out fellow South Korean K-Pop band BlackPink. ‘Boy With Luv’ was viewed 74 million times in 24 hours!

The band has been flipping between the US and Asia actively promoting their new album and single which was released on April 12, including their much-discussed live performance on Saturday Night Live. Accused of being just another music ‘fad’ BTS continue to break music records and break down stereotypes in the ‘white-washed’ world music industry.