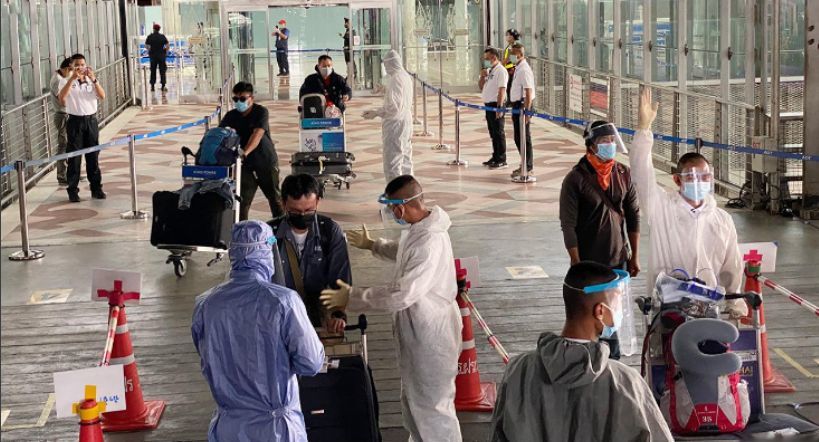 Today the Centre of Covid-19 Administration reported 17 new cases of Covid-19 infection. All the cases were repatriated Thai personnel returning from the Middle East. Spokesperson Dr Taweesilp reported that most the returnees were asymptomatic and were confirmed as infected after a second test.

“13 of the new cases had returned from Kuwait, 12 were men aged 31-56, and the other was a 44 year old woman. 5 were put into state quarantine in Bangkok while 8 are now housed in Samut Prakan province. Their infection was confirmed by the second test on June 2, though only one of them had shown symptoms.”

“2 other patients were a male and a female who had returned from Qatar on May 22. The male aged 24 was asymptomatic while the woman, aged 29, had a high fever. Both were in state quarantine in Samut Prakan and tested positive on the second test on June 2.”

“The other 2 cases were males, aged 28 and 29, who had returned from Saudi Arabia on May 21 and May 25. Both were asymptomatic and found to be infected in their second tests on June 1.”

“The double-digit figure is very high, but is from the daily arrival of returnees, which is expanding to 400-500 people per day. The key is quick detention, quick treatment and quick recovery.”

So far 174 Thais had returned from Kuwait and 18.3% of them tested have positive for Covid-19. Seventy-nine returned from Saudi Arabia and the infection rate was 7%. From Qatar, 216 arrived and 5.49% of them were infected.

Today marks the 10th day without any local infections in Thailand, with the total number of confirmed cases rising to 3,101, 75 personnel are under treatment in hospitals across the nation with 2,968 have recovered and been discharged (no change), and the death toll remains at 58 with no additional changes.