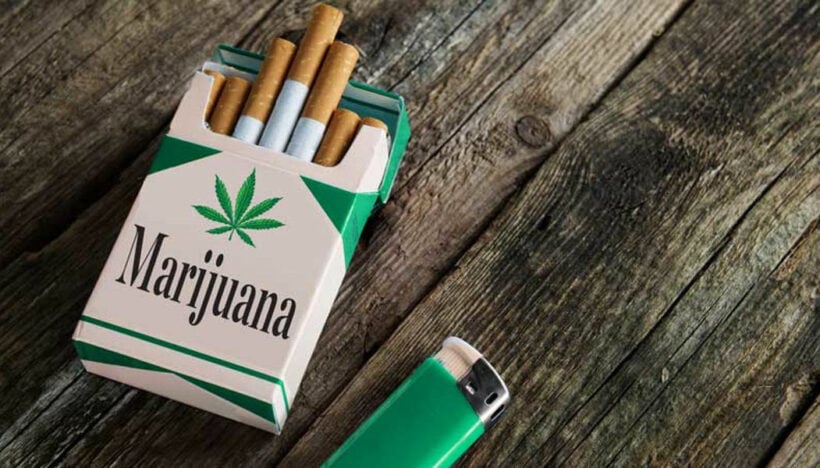 Thailand’s Tobacco Authority is continuing to lobby for a license for the production of cannabis-based cigarettes but has a few legal, and moral, hoops to climb through before anything happens.

Using the ‘health benefits’ argument, the Thai tobacco industry is hoping it can get the go ahead to manufacture cannabis-based cigarettes which could, if given permission, be as available in convenience stores as normal tobacco cigarettes. But that situation is still a long way away.

The Thai Tobacco Authority has already said it is supporting the move from tobacco to cannabis crops as the sales of cigarettes are dropping due to the higher taxes being imposed. So they’re keen to get a slice of the new legalised cannabis cake.

Daonoi Suttiniphapunt, the MD of the Thai Tobacco Authority says they’re ready to take the necessary next steps.

“Our main intention when requesting a license had to do with the medical benefits, research and extracting the oils to export to other countries. But if the Ministry of Health lets us produce cigarettes, we are ready to do so immediately.”

She say that if legislated the Cannabis cigarettes would mostly contain ‘CBD’, the non-psychoactive compound that doesn’t give you a ‘high’. So the alleged ‘medical benefits’ would be available but not all the ‘highs’ marijuana smokers usually associate with the popular plant.

CBD is the cannabis product socially conservative states in the US, like Texas and Utah, are more likely to support for the medical benefits that are said to assist certain chronic medical conditions.

According to the Public Health Ministry, the use of hemp must be licensed and the farming of the plant is subject to strict regulation. The Ministry has so far granted permission for cannabis farming in 15 districts of six provinces, mostly in the north.

Meanwhile the FDA secretary-general Thares Karassanaiyarawiwong says the Tobacco Authority could obtain a licence to plant cannabis for research, not commerce. The agency can request permission either as a researcher or grower. A separate licence is also needed to import cannabis.

WARNING: Smoking ANYTHING can be a hazard to your health.