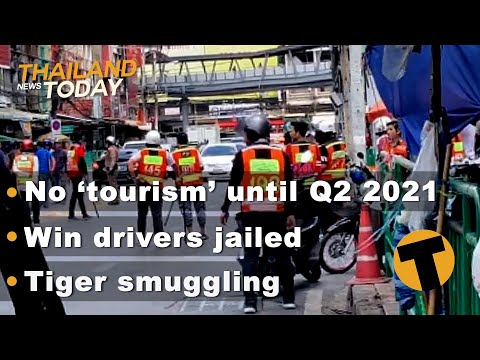 Kiss any resemblance of general tourism to Thailand goodbye, at least until march next year, at the earliest.

That’s the outlook for Thailand’s beleaguered tourism industry from the usually optimistic Minster for Sports and Tourism.

So, apart from the STV and the modified 60 day Tourist Visa, and a few other options – all involving quarantine and a lot of red-tape for now – there’s not much good news on the horizon for people wishing to get back to Thailand right now. The minister’s outlook wipes out any hope of any tourism resurgence for the 2020/2021 high season.

As always The Thaiger will keep you up to date with any changes in the visa situation.

18 motorbike taxi drivers have been sentenced to prison for their involvement in a mass street fight in June last year where a bystander was killed by a stray bullet. A Bangkok court handed down prison sentences ranging from 5 years to more than 27 years.

The fight broke out between two gangs of win drivers in Bangkok’s Bang Na district, south of the city centre. Around 50 to 60 drivers attacked 20 to 30 drivers from a rival Win gang with knives and other weapons, apparently because Soi 2 drivers, who were unregistered and operated without the proper orange identification vests, took customers away from the other group.

A 20 year old Kerry Express courier, was caught in the crossfire and was shot and killed when a stray bullet struck him in the head. The drivers who were directly involved with the murder were sentenced to the longest prison terms.

In a crackdown on suspected wildlife trafficking, the Department of National Parks, Wildlife and Plant Conservation seized 5 tigers from a private zoo in the Isaan province Mukdahan.

DNA tests confirmed that at least 3 of the 5 tiger cubs are not related to the tigers in the Mudka Tiger Park & Farm, leading officials to believe the wildcats were smuggled in.

Some of the tigers seized were not alive and photos of a severed tiger head have been posted by various Thai news websites.

Apparently, this isn’t the first time the Mukda Tiger Park & Farm has been investigated, having come to the attention of officials in the past for wildlife trafficking transgressions.

A woman saved her husband from a wild elephant attack by screaming and banging objects together, driving the elephant away with the loud noises.

The 33 year old, a rubber tapper in the Isaan province Bueng Kan, is being treated at a local hospital. Luckily, his injuries from being stomped by the elephant are not too bad.

His 37 year old wife says the elephant in the area caught her and her husband off guard, adding that wild elephants don’t typically roam in that area.

No lockdown in Chiang Mai after local Covid-19 cases

There will be no lockdown in Chiang Mai after the recent Covid-19 case where 3 women have tested positive at a local hospital after returning from Myanmar.

Director general of the Public Health Ministry’s Department of Disease Control says the locals in Chiang Mai are taking proper health precautions and he doubts the case will cause a wider outbreak.

You can follow the details of that story at thethaiger.com

Suvarnabhumi expansion being reviewed in line with “new normal” expectations

The 44 billion baht northern expansion of Bangkok’s Suvarnabhumi airport is being revised and refined, to meet “new normal” requirements.

The AOT president says the process of review will take 1 or 2 months to complete.

All we need is the flights and the tourists to return.