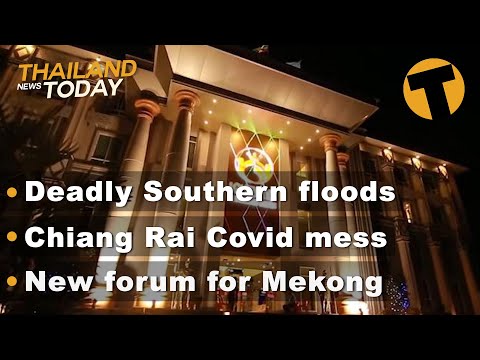 At least 24 people have now been reported to have died due to flash floods in Southern Thailand following a week of heavy rain. 19 of the victims were in Nakhon Si Thammarat which was hit the hardest.

Today, the Department of Disaster Prevention and Mitigation reported 3 more deaths from flooding in the southern region. A woman drowned in Surat Thani and 2 women drowned in Songkhla.

More rain is expected in Southern Thailand with isolated thunderstorms in the southernmost provinces of Pattani, Yala and Narathiwat.

New Year countdown events get the “okay,” but under strict health measures

Lockdowns, social distancing, face masks and lots and lots of hand sanitiser… this year has been different to say the least and counting down the last hours of 2020 in Thailand will be different as well.

New Year countdown events have been given the “okay,” but just as long as health and safety measures are in place, according to the CCSA.

After recent Covid-19 cases from those who illegally crossed the Thai-Myanmar border, evading the mandatory quarantine, PM Prayut Chan-o-cha told state agencies to step up precautions.

Those ‘precautions’ will likely involve restrictions on some of the traditional New Year events and at least official requests for people to gather more responsibly and wear face masks.

So far, 3 0 Covid-19 cases in Chiang Rai have been linked to the newly infamous 1G1-7 Hotel in the Myanmar border town Tachileik.

Some have confirmed they worked at the 1G1-7 Hotel. A 32 year old Chiang Mai who was a DJ at the venue recently tested positive in Chiang Mai after crossing the border into Chiang Rai illegally as well.

Along with the local transmission in Chiang Rai, health officials have recently reported local cases in Bangkok and Sing Buri. Officials are bracing themselves for more infections over the next week as health authorities are furiously tracking and tracing ‘at risk’ people.

In all, Thailand has 38 cases directly or indirectly linked to people returning from Tachilek was detected on Nov 24.

That ban on sales of alcohol online kicks in today. Announced 3 months ago, the actual ban actually starts from today.

The Royal Thai Police and Public Health Ministry reminded us about the prohibition on the sale or advertising of alcoholic beverages through digital and social media channels.

“From Monday, December 7, the sale and advertisement of alcoholic beverages online will be prohibited. Direct selling, persuading consumers, introducing products or other related services via digital channels that enable sellers to complete a sale without meeting the buyer face to face is now banned.”

But the new prohibition doesn’t include paying for alcoholic beverages via electronic methods at stores, restaurants or establishments that serve alcohol.

Following 2 decades of campaigns against the hydro-dams and water projects along the Mekong River, local civic groups and conservationists finally launched the “Mekong People’s Forum”.

200 people attended the forum including local villagers, conservationists, journalists, and representatives from the US and Australian embassies. The Chinese embassy, although invited, did not send anyone to attend the event

This is the first time the many conservation groups and activists have come together with a single forum to tackle the many challenges for the river. 11 dams have now been built upstream in Laos and China causing massive problems for the natural flow of the river downstream through Thailand, Cambodia and Vietnam.