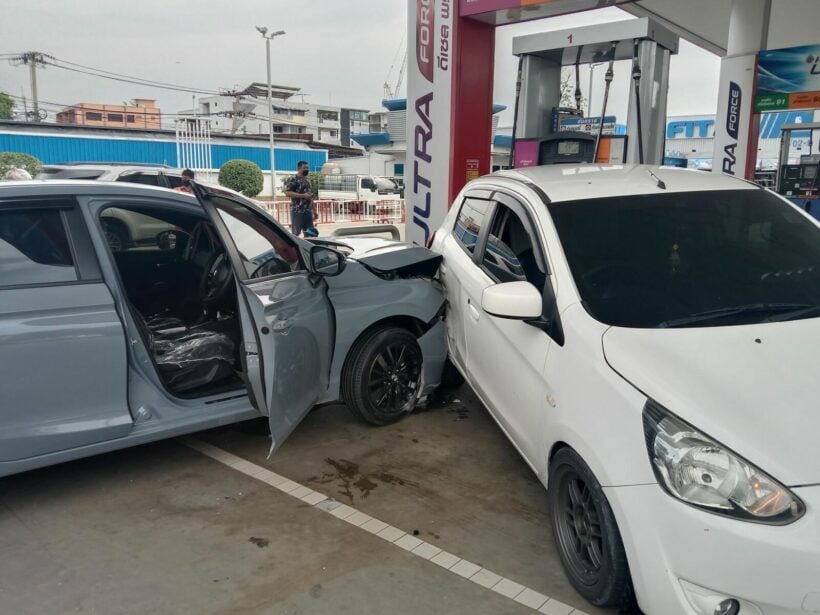 A petrol station attendant in Bangkok had to get his leg amputated after a car slammed into him and another car while he was filling up the gas. A driver, who had little experience behind the wheel, lost control of her new car, crashing into another car and the attendant. She had just bought the car that day and Thai media reported her as a “beginner driver.”

The owner of the car that got hit shared pictures of the accident on her Facebook account which showed the grey-blue car smashed up against her white car at the petrol station in Bangkok’s Bang Khun Tien district. A large stain of blood was on the ground. She wrote…

“Parking to fill up the gas. Where did this car come from? Absolutely unlucky. I Feel sorry for the staff who lost his leg”.

The petrol station owner, Sathorn Simuang, told Thai media that the petrol station attendant travelled from a neighbouring country to work in Thailand and has been working at the station for over 10 years. He says the attendant was distraught after losing their right leg and refused to eat. The owner says promised other job positions for the attendant after they recover.

DoUKnowWhoIAm
8 hours ago, joseph said: I have been driving here for almost 30 years. You can go upstairs for an authentic license or buy a fake downstairs. In the old days you had to walk past the fake stand to…
HolyCowCm
On 3/25/2022 at 12:28 PM, Soidog said: So no driving license then? Hence no Insurance. So pay up or lock her up for a very long time. Nope. Legit. But just no experience.