The construction of Thailand’s first monorail, aka. “Gold Line” in Charoen Nakhon area in Thon Buri, is causing some traffic congestion in the area. The developer, Krungthep Thanakom, is making up for lost time still hope to meet the October deadline for the new Gold Line to officially open.

The project has been delayed due to the Covid-19 outbreak and lockdowns, when the manufacturer in Anhui, China was unable to ship the first train to Bangkok in April. KT is the public investment arm of the Bangkok Metropolitan Administration, responsible for the city’s infrastructure projects.

“Now, however, the Gold Line project is back on track. The train manufacturer has shipped trains to Bangkok with the first due to arrive on Wednesday.”

KT originally expected to organise a test run in April, but even with the delays, it still expects the service to be ready for its first passengers on October 1. The system is a monorail system, unlike the existing BTS or MRT train carriages, and will have no drivers on board.

As a Covid-era project the Gold Line has a symbol of hope for recovery in the suburbs west of the Chon Phraya. The local community is looking to the new line to boost to the area’s businesses, battered by months of enforced closures. 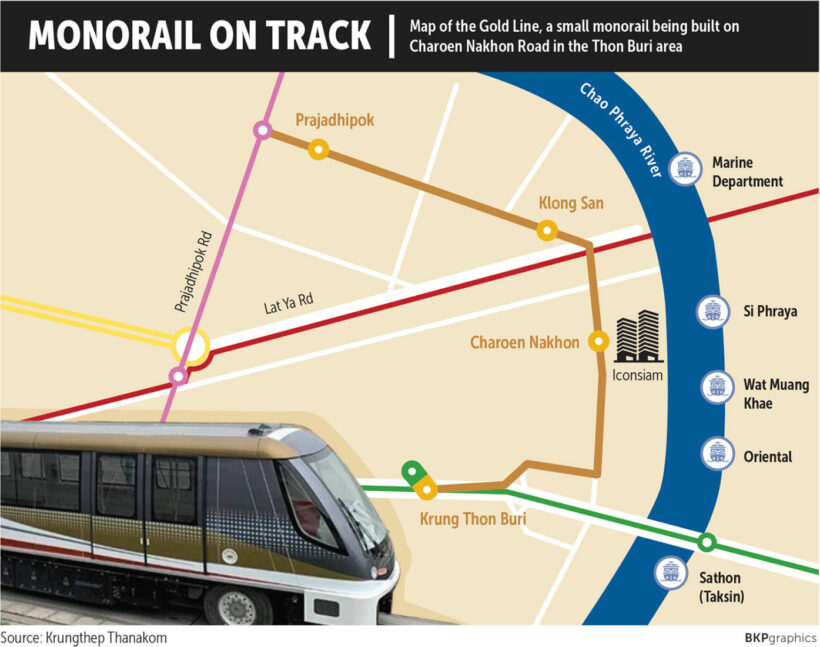 The Gold Line is a new people mover line, not part of the current MRT Master Plan. The line was proposed in July 2015 and approved by the cabinet in 2016. The first phase is expected to open in October 2020, with another phase opening in 2023. It will connect Krung Thonburi BTS station with Prajadhipok Road in Thon Buri District, a total of 2.68 kilometres.

Development of the line is the responsibility of the Bangkok Metropolitan Administration, with a budget of 3.8 billion baht. The environmental impact assessment was completed in December 2016.

The Innovia APM is a rubber-tired automated (as in ‘driver-less’) people mover system manufactured by Bombardier Transportation. The APM technology was originally developed by Westinghouse, then owned by Adtranz, and most recently acquired by Bombardier in 2001.

Charoen Nakhon Road, in the Klong San district, is a new addition to Bangkok’s list of hotspots. Most resident of Bangkok hadn’t even heard about the area until the arrival of the swish Iconsiam mega-mall. Since Iconsiam’s opening the area has started to attract a more trendy clientele, shopping and residential options.

The neighbourhood was once home to many public servants, markets and warehouses. It certainly wasn’t considered ‘fashionable’ or a place upwardly mobile Bangkokians wanted to live. The name ‘Klong San’ was chosen by Phraya Yisan, an elite civil servant who was appointed to develop canals in the area.

The district was the location of one of the first hospitals in the country, the Thonburi Hospital, originally constructed  over a century ago during the reign of King Rama V, to treat plague patients.