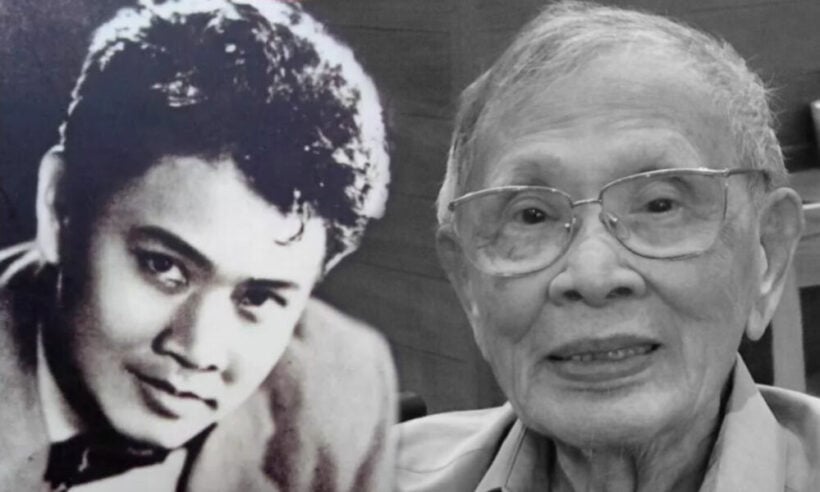 Well-rounded, artistic Thai jack-of-all-trades Chalee Intaravijit has died at the age of 98 after a full and diverse life as a songwriter, film director, theatre actor and more. Last night the artist passed away at Sirijaj Hospital.

Born on July 6 1923, his prolific career spanned more than 5 decades, and the National Cultural Commission named him a National Artist in Performing Arts for movie and drama in 1993. The commission recognises artists each year that contribute to Thai cultural heritage in intangible ways.

Originally from the Samut Sakhon province and named Sa-nga, he graduated from both Amnuaysilp School and the State Railway of Thailand Vocational School before pursuing the arts. He married Sirinthip Siriwan, an accomplished actress who was half Thai and half Dutch, and whose film career spanned 30 years from 1957 until her mysterious disappearance on the set of her last film “E Chu Ku Pu Pa”. To this day her whereabouts are unknown and no trace of her was ever found.

Chalee used the melody of the Bread song “Aubrey” and wrote Thai lyrics for the hit song “Mua Ther Chak Chan Pai” (in English, “When She Leaves Me”) as a tribute to his missing wife. It was performed by both Pornpimol Thammasan and later by Orawee Sajjanond. That was only one of nearly 1,000 songs Chalee penned in his prolific career. Other notable hits included Chamloey Rak, Mae Klong, Mon Rak Dok Kham Tai, Ruan Phae, Sadudee Maharaja, Saen Saeb, Sao Nakhon Chaisri, Tha Chalom, and Thung Ruang Thong.

No cause of death was reported as well as no immediate plans for funeral arrangements for his family or his fans.