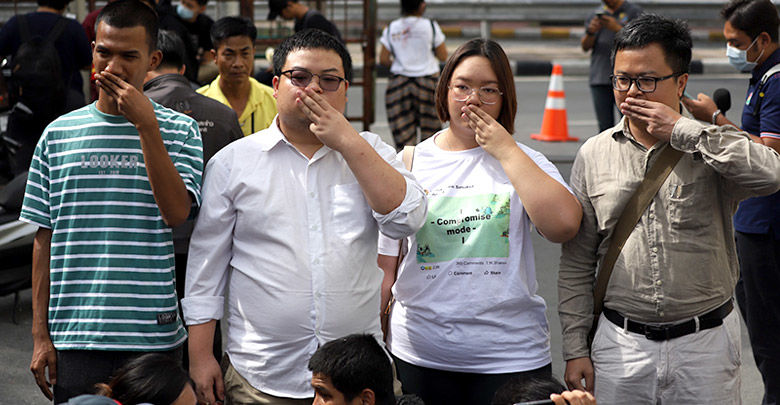 Pro-democracy protest leaders reported to police today to hear lèse majesté charges which carry a maximum penalty of 15 years in prison for insulting or defaming the Thai Monarchy.

The ongoing protests have opened discussion questioning the Thai Monarchy, a move considered taboo in Thai society and also risky as “insulting” or “defaming” statements could violate the lèse majesté law under Section 112 of Thailand’s Criminal Code.

Whoever, defames, insults or threatens the King, the Queen, the Heir-apparent or the Regent, shall be punished with imprisonment of three to fifteen years.

The 5 leaders are facing charges over the September 19 to 20 rally where the protesters placed a plaque in an area near the Grand Palace, declaring Thailand “belongs to the people.” The plaque has since been removed.

A lèse majesté complaint was filed by a leader of the pro-government “multi-coloured shirts movement” Tul Sittisomwong who said the protesters had “once again crossed the line,” according to an earlier report from the Bangkok Post.

“I don’t mind if they talked about politics, the prime minister or the constitution because they have the right to do so, but not about the monarchy.”

Arnon, who is a human rights lawyer, says he’s not worried about the charge and believes it will be cleared. The activists were accompanied by 2 counsel from Thai Lawyers for Human Rights.

“It is now time for us to speak straightforwardly about the royal institution. Even if what we say goes unheard and laws are used to shut our mouths, we will continue to fight.”