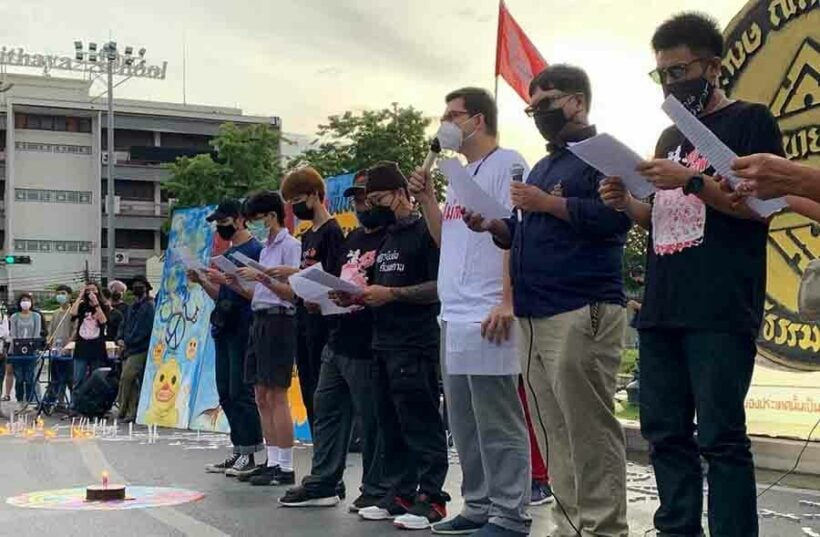 The pro-democracy Ratsadon group is planning another march today, calling once again for the resignation of PM Prayut Chan-o-cha. Activists are also organising a flea market to shows its opposition to the current ban on dining-in at restaurants in Bangkok and a number of other provinces. The controversial restrictions were introduced at short notice on Monday, taking restaurant operators by surprise.

The Bangkok Post reports that Ratsadon members have taken to Facebook to urge supporters to assemble near Government House at 4pm today to call for the removal of the PM over his handling of Covid-19. The group points out that while many other countries around the world are emerging the other side of the pandemic, the situation in Thailand is rapidly deteriorating. Today, the country has recorded a record high of 61 deaths and 6,087 new infections.

Ratsandon has slammed the slow pace of the vaccine rollout, adding that people who are enduring financial hardship as a result of Covid restrictions have been left to fend for themselves. Announcing plans to host a flea market at today’s protest site, the group has invited supporters and restaurant owners to attend.

Meanwhile, restaurant operators opposing the sudden re-introduction of the dine-in ban have launched a campaign on social media called #GooJaperdMuengJaThammai (We’ll Open, What Are You Going To Do About It?). They plan to set up makeshift restaurants and beer gardens by the roadside, across various locations, where campaigners will give speeches.

Ratsadon leader Parit Chiwarak, aka “Penguin”, has also taken to social media to urge business owners who’ve been affected by the government’s restrictions to attend the flea market in protest.

In a separate rally tomorrow, activist Jatuporn Prompan will lead the protest group, Thai Mai Thon, in a march on Government house, calling for the PM’s resignation.

AlexPTY
...and other Thais who work every day on a fixed salary and make this country still functional, wake up, watch the news and think: Hey, who will support me and my family, i am not in tourism industry, never worked…