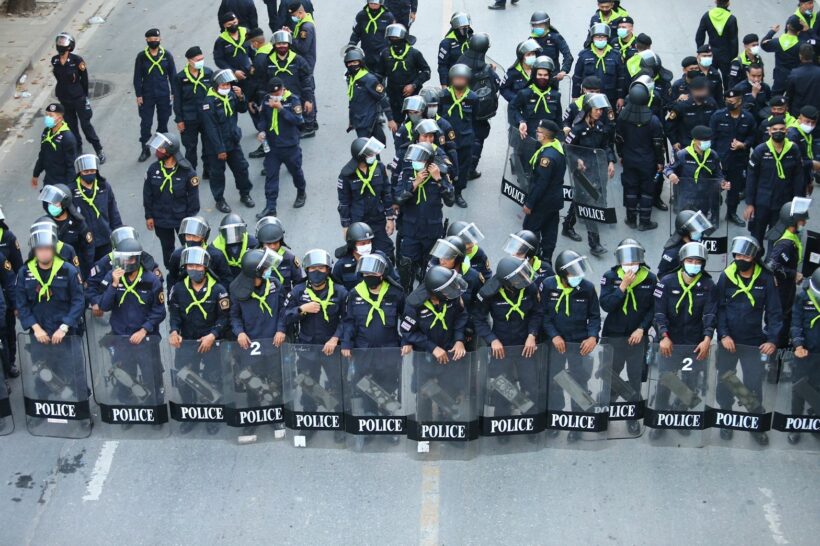 The Metropolitan Police Bureau is threatening to charge activists involved in Tuesday’s rally outside the Parliament building in Bangkok. At least 55 people were injured when violence broke out between rival protest groups and police. Piya Tawichai, from the MPB, says that, of the 4 groups outside the building, only 3 had applied for permission to hold a rally, including a small group of Royalist parading in yellow shirts earlier in the day.

“Those who came to rally without obtaining prior permission were deemed to have assembled illegally.”

Anti-government activists clashed with yellow-shirt pro-establishment protesters after tearing down police barriers made from concrete blocks and razor wire on Thanan Road. Both groups hurled objects at each other until they were separated by a metal fence erected by riot police. Piya says the yellow-shirt protesters had been granted permission to gather, and that, while officers were unable to keep the peace, they did their best to keep the 2 groups apart.

“Officers finally retreated as their operations came under increasing pressure.”

The MPB says a number of police vehicles, including 3 water cannon trucks, 2 water trucks, a 10 wheeler truck and a prisoner transport van, were damaged by protesters, mostly graffiti.

In response to the Erawan Medical Centre saying it treated 6 people who had been shot, he insists officers did not use rubber bullets or live ammunition. Police say violence broke out around 8.15pm near Thahan Road, with a yellow-shirt protester and an anti-government activist being shot.

The Bangkok Post reports that several bullets were also found near the Kiakkai intersection, with bullet holes seen in nearby trees and in the road surface. Kasidit Muktanant, a 35 year old royalist, was arrested for carrying a gun and ammunition at the protest site.