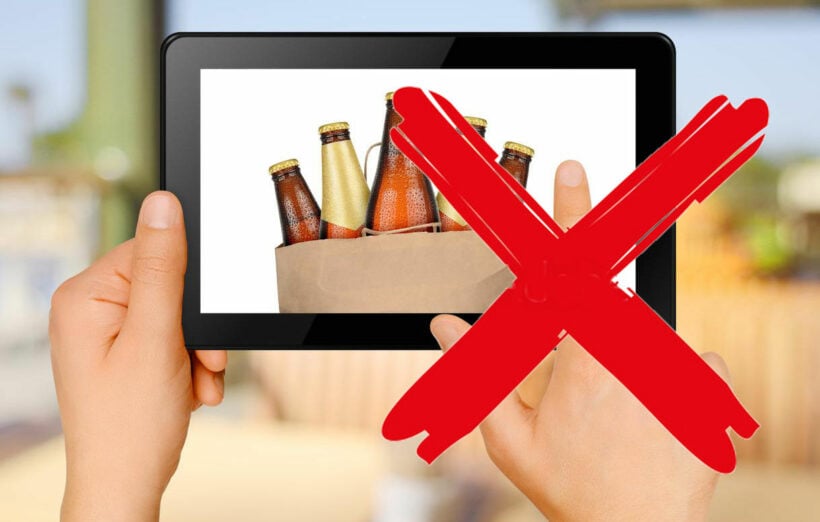 From December 7 you’ll no longer, officially, be able to purchase alcohol online in Thailand, according to a posting in the Royal Gazette back in September, the Thai government will prohibit the sales and promotion of alcoholic drinks on every online platform from December 7.

The ban includes direct sales, promotion and introduction of alcoholic products online, but will not include electronic payments of purchases at retail stores, restaurants and bars.

Selling and buying beer, wine and spirits online has become more popular, but the Thai PM says that internet alcohol sales are harder to control than sales at local liquor stores. The announcement said that it’s difficult to check that the provisions of the Alcoholic Beverage Control Act are being followed online, like no alcohol sales before 5pm or on certain holidays (although many local stores didn’t follow the rules anyway).

“The Royal Gazette had published the announcement of ‘Prohibition of the sale of alcoholic beverages via electronic sales nationwide’ on September 8 noting that alcohol has become more easily accessible online due to the popularity of social media platforms and specialist Apps.

With Thai officials obsessed with the perceived evils of alcohol, Thailand already has a ban on the sale of alcohol before 11am, between 2 – 5pm, and after midnight. It’s also illegal to brew your own beer at home or to post pictures of branded alcohol online, either as a private citizen or as a company. But the government’s latest announcement, that drinkers won’t be able to purchase alcohol online that really ignited the Twittersphere and social media.

Deputy PM and the Minister of Public Health, Anutin Charnvirakul, told AP after a meeting of the alcohol control committee on November 7, that they’d agreed to draft guidelines, under the revision of the Public Health Ministry, to inform the Public regarding the Royal Gazette announcement of banning online alcohol trading.

“Violators of the new ban will be subject to up to six months in prison and/or a fine of up to 10,000 baht.”

People will still be able to use electronic methods of payment, like bank transfers, when buying alcohol at stores, restaurants or other establishments, just not purchase from online portals.

The Ministry is going to launch a publicity campaign about the new bans in the week leading up to December 7.