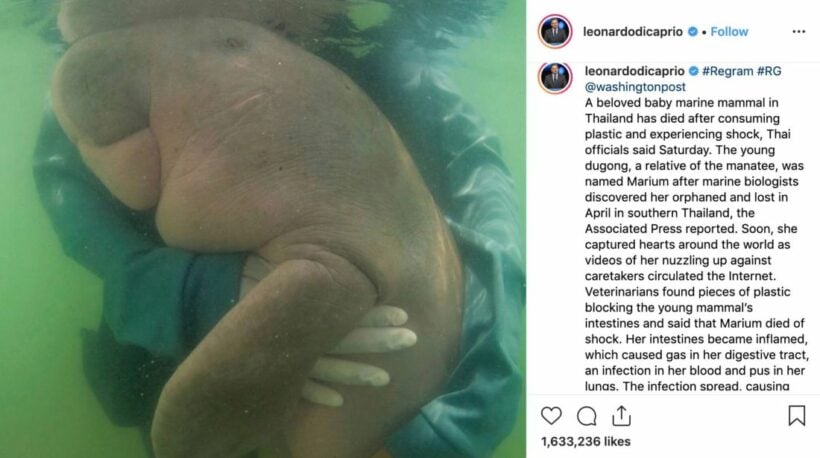 Hollywood star, environmentalist and Instagrammer, Leonardo DiCaprio, has posted the story of Marium the baby dugong in Thailand who died after ingesting plastic.

“A beloved baby marine mammal in Thailand has died after consuming plastic and experiencing shock,” he wrote in his instagram post, referring to Thai officials’ announcement on Saturday of the death of the dugong.

“The young dugong, a relative of the manatee, was named Mariam after marine biologists discovered her orphaned and lost in April in southern Thailand,” he added quoting an AP news report.

“Soon, she captured hearts around the world as a video of her nuzzling up against her caretakers circulated on the Internet.”

By this morning the post had drawn about 1.6 million likes and 17,000 comments.

Local news media in Thailand covered the story of Marium and Yamil, two baby dugongs that were unable to be saved, whilst many others have washed up on coastal beaches over the past year.

The Andaman Coast, home to Phuket, Krabi, Koh Phi Phi, Koh Lanta and many other tropical tourist magnets, is severely contaminated by plastic waste. The celebrity’s post will help draw attention to the coastal region’s environmental challenges. The Andaman coastline runs from Ranong down to Trang and Satun near the Malaysian border.

Meanwhile, Earth Alliance, an organisation to combat climate change and biodiversity loss, launched last week by Leonardo DiCaprio, businesswoman and philanthropist Laurene Powell Jobs and investor and philanthropist Brian Sheth. Since launching in 1998, the Leonardo DiCaprio Foundation has provided more than $100 million in grants to projects both at sea and across all seven continents.