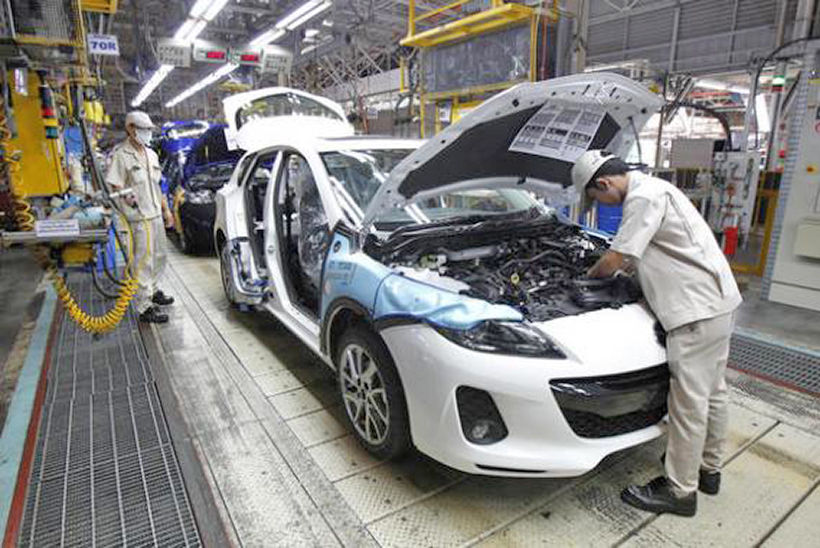 The Covid-19 pandemic could cut Thailand’s automobile production by up to 50%, according to the Federation of Thai Industries. Thailand is the eleventh biggest carmaker in the world, producing more than 2 million cars last year. The FTI now expects only half that in 2020. FTI automobile club’s spokesman club’s spokesperson was speaking to Thai Enquirer:

“If the outbreak is prolonged until September, we are seeing only one million cars produced.”

He says of that million, half will be for domestic use, but the Thai economy is heading for recession, with high household debt and low private investment. The other half will be for export.

“At the moment, we do not know if the situation for domestic sales or exports will be better once the outbreak is contained so we are keeping the prediction at 50% for domestic and 50% for export right now.”

The FTI spokesman added that exports to the US, Europe and Japan are the most worrisome, while demand is starting to return from China.

“The situation is dire and it is now much worse than the flood in 2011. The water comes and goes in the country but the outbreak is worldwide and it is affecting every industry. If everything is bad, car sales will be bad.”

FTI’s prediction is even less optimistic than Kasikorn Research Center’s projection of 1.5 million cars produced. FTI says the 1.5 million mark will only be reached if both local and global governments are able to gain control of the pandemic by June.

The grim announcement comes soon after General Motors pulled production of its Chevrolet line out of Thailand. Many automakers, including most Japanese makers and Ford, halted production last month. They are expected to resume operations by mid or late May.

Sales dropped by 40-50% in March and April. Most original equipment manufacturers cited concern over the spread of the virus within their factories.

There is an excess of inventory at the moment, and some dealers have opted to lower prices to get rid of it. For example, Nissan X-TRAIL, which used to cost about 1.5 million baht, is now down to approximately 900,000 baht at a showroom in Chachoengsao.

FTI says most carmmakers will only return to partial production during May, due to their stock capacity, poor sales and the disruption in the supply line.

“We have to import some parts for production but the disruption in the supply line is still there as many of the manufacturers in China and Japan have also halted their production in the past few months.”