PHOTO: Surachat speaks to the media about Monday's shots fired at his car in Patpong - Thai PBS World

Thailand’s former immigration supremo, Surachat Hakparn, spoke to the media yesterday about the bullets fired into his car on Monday night. He was not in the car at the time.

He speculated confidently that the shots fired at the white Lexus SUV, parked near a massage establishment in Patpong, Bangkok, were connected to a two billion baht purchase of a biometric system for Thai airports. Surachat passed over documents relating to the biometric system purchase to police while being questioned at Bang Rak police station on Tuesday.

His comments to the media yesterday give the first insight into possible reasons for his abrupt side-lining whilst at the peak of his career.

When he was Pol Lt Gen Surachat and head of the Thai Immigration Department, he urged the national police chief, in a written statement, to consider cancelling the purchase of the biometrics system at the start of last year. The two billion baht biometric equipment was to scan faces and fingerprints of passengers as they passed through Thai airports.

The National Police Chief has since gone on to praise the new biometrics system and called media conferences to show examples of the new system’s effectiveness in identifying fake passports and people using fake documents.

At the time, Pol Lt-Gen Surachat was invited by the National Anti-Corruption Commission to testify about the procurement. The two billion baht budget for a new biometrics system been approved by three previous commissioners of the Immigration Bureau. But Surachat ultimately rejected the purchase.

Surachat met with the deputy national police chief yesterday to provide additional information and his account about the shooting and possible motives.

A motorcyclist and pillion rider were caught on CCTV shooting at Surachat’s parked Lexus. The gunman, sitting on the back on the bike, appears to shoot eight times into the vehicle at about 8pm on Monday night. The bullets all ended up in the lower part of the car doors, most in the front part of the rear door.

In various reports, he was either having a massage at the time or the shooting, or attending a business meeting at a restaurant. There was no one in the car at the time of the shots being fired.

The former Immigration Chief called on the national police chief to arrest the two perpetrators, saying that “it should be easy because they were clearly recorded by the CCTV system” (although they were both wearing full-face helmets).

He categorically denied speculation as “ridiculous” that he might have staged the shooting to attract public attention. He maintained that he has kept a low profile since he was abruptly side-lined in May last year to serve as a civil advisor in the PM’s Office.

Speaking on the “Inside Thailand” program yesterday, Surachat says he ended his police career with “no personal grudge towards other officers”.

“I am no longer a police officer. I left my police career behind with no personal conflicts.”

But he did mention that he wants to return to the police force. 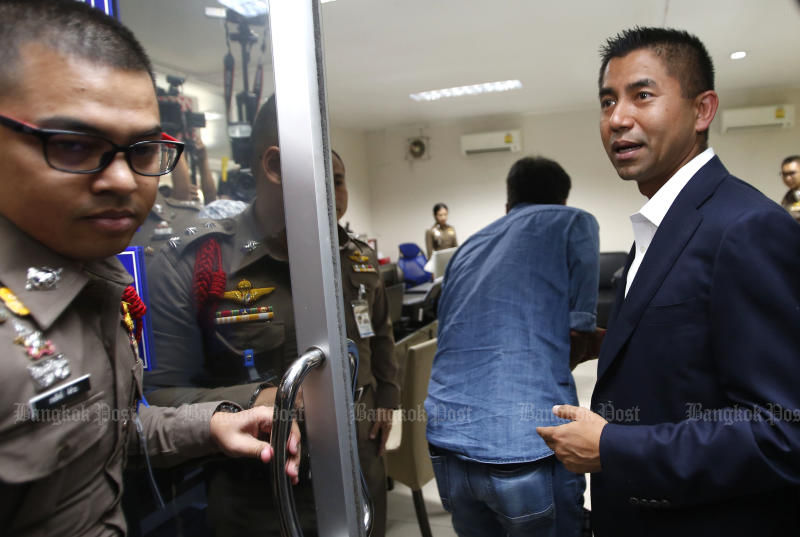