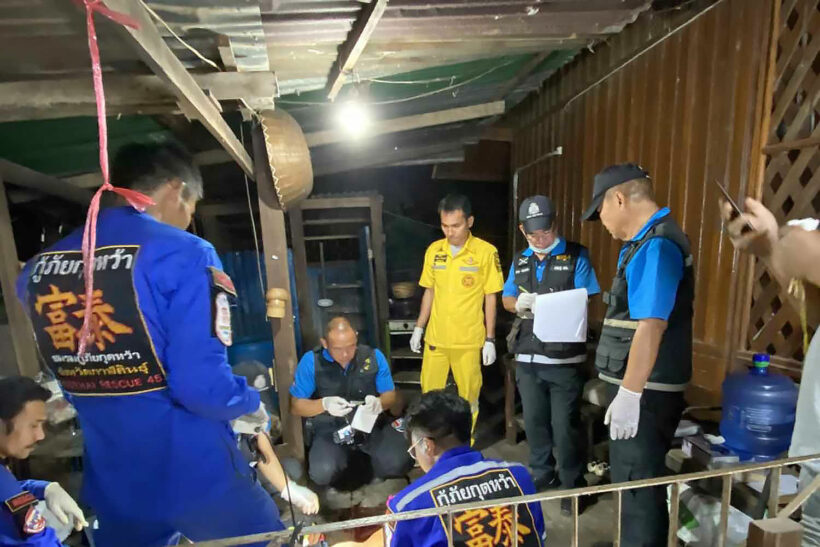 PHOTO: Police and rescue workers at the house where a policeman was found murdered yesterday in Kalasin province - Yongyuth Phuphuangpet, Bangkok Post

The body of a police officer was found in the northeastern province of Kalasin yesterday. He had been stabbed to death and his body severely mutilated. Police later tracked down and arrested 45 year old Amornlak Jitkoh, a Kalasin native, who had fled and hidden in a forest in Nakhon Ratchasima province. He was persuaded to surrender and return to Kalasin.

Investigators say Amornlak’s wife had an affair with the victim.

Police, medical staff from a local hospital and a rescue unit rushed to the scene at about 1:30am after the discovery was reported.

In an unfinished wooden house, the body of 57 year old police lieutenant colonel Jamras Dolchua, wearing a black T-shirt and yellow-black shorts, was found lying face up in a pool of blood. He had been stabbed at least 20 times, on his torso, buttocks and thighs. His genitals were removed.

Leaves and other flammable materials had been set on fire at several spots around the house, in apparent attempt to burn it down and destroy evidence. A fire was also set at the rear of a white Toyota Fortuner parked nearby. All of the fires had been put out by neighbours. Police found three beer cans in front of the house. 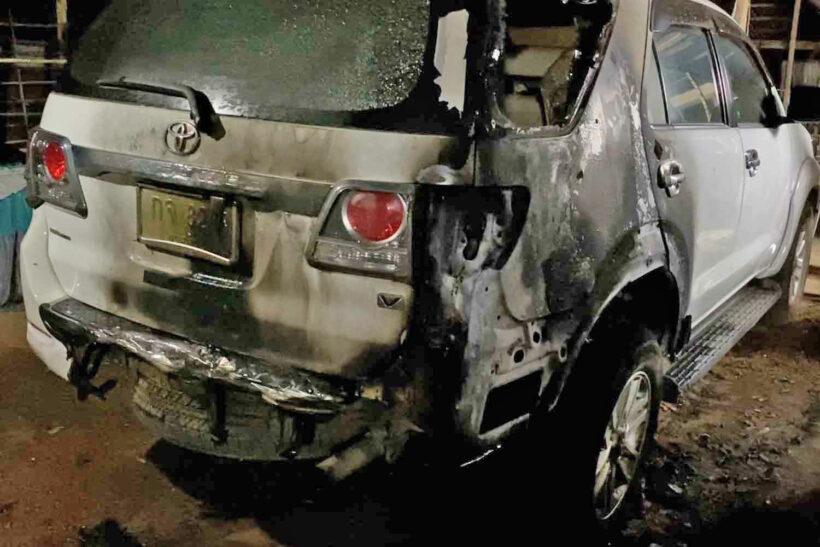 PHOTO: The Toyota Fortuner at the scene of the murder of a senior police officer in Kalasin province – Yongyuth Phuphuangpet, Bangkok Post

A son of Jamras told the police that his father usually stayed overnight at a house in Kalasin Town, and occasionally spent the night at the wooden house where his body was found. He says Jamras had an affair with a woman who told him she was a divorcee, but ended the relationship after learning she was not divorced.

The son, who was not named, believes the woman wanted to return to his father, upsetting her husband, thus providing a motive for murder.

The body was taken to Khon Kaen Hospital for an autopsy.