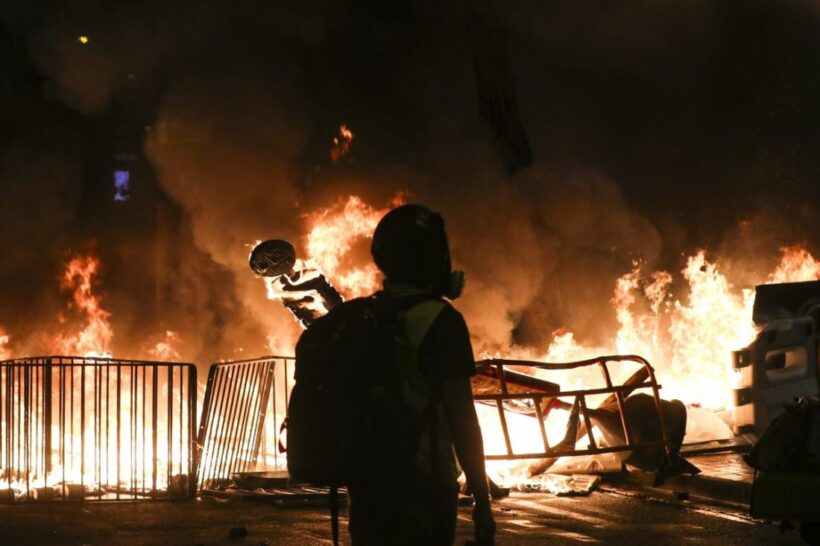 Police used tear gas and water cannon in Hong Kong’s financial district last night, as protesters defied a ban and ignored threats from China. This is the 13th weekend of such protests.

The protests began yesterday afternoon, with thousands of black-clad, umbrella-carrying activists taking to the streets and chanting, “reclaim Hong Kong, revolution of our times.”

Water cannon and tear gas were used by police to clear large groups of protesters who had gathered in front of the parliament building, known as LegCo (Legislative Council). They used blue dye in the water cannon, with some local media claiming this was to make it easier to identify suspects.

Protesters also marched past the residence of Hong Kong’s Chief Executive, Carrie Lam, who is the main focus of their anger after she tried to pass a bill that would have allowed extradition to China.

The protests started by the proposed extradition bill have now grown into wider calls for democracy and a push back at Beijing rule. To date, millions have taken part in peaceful marches, but some protesters have also clashed with police.

There is an air of defiance among protesters who are determined not to give in, as explained by one woman known only as Wong.

“It’s ‘now or never’ for Hong Kong. I’m a mother-of-two. They didn’t come today, but their grandmother did. We’re defending the right of assembly for the next generation in Hong Kong.”

Yesterday’s protests went ahead despite a number of activists being arrested on Friday, a move seen by many as an attempt to derail this weekend’s rallies.