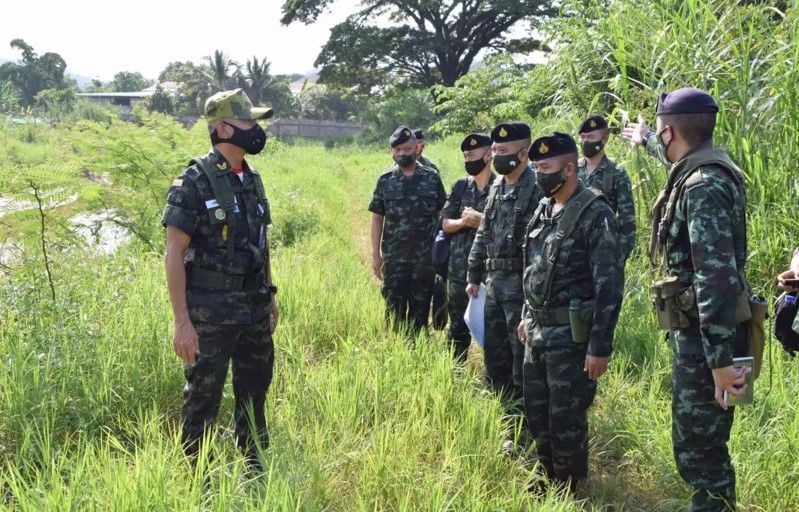 A Burmese teenager who lives near the Thai-Myanmar border tested positive for Covid-19. Now, Thai border patrol officers are tightening security even more to make sure Myanmar’s outbreak doesn’t cross the border and cause a second wave in Thailand.

The 17 year old Burmese boy tested positive for Covid-19 last week. Reports say the teen was in Myanmar’s Payatongsu district, about 5 kilometres from the Three Pagodas Pass checkpoint bordering Kanchanaburi. The teen started having symptoms on September 11 and tested positive on September 17.

Only around 13 people were reportedly in close contact with the teen and they are now in quarantine at a district school. Health officials suspect the teen was exposed to the virus from his uncle who had travelled to Moulmein, a large city near Yangon which had a spike in coronavirus cases. The uncle has been tested and is in quarantine, but his test results are still pending.

In another case, a 2 year old Burmese child tested positive for Covid-19 after leaving Thailand. A report from Thailand’s Ministry of Public Health Disease Control Department says the child most likely contracted the virus while travelling from Thailand to Myanmar around September 4 to September 10. The family travelled to Mae Sot and entered Myanmar through natural passageways. 2,635 people in Mae Sot tested negative for Covid-19.

Since Myanmar reported a surge in cases, starting mostly in the country’s Rakhine state on the western coast, Thailand has been increasing border patrol to make sure people are not entering Thailand illegally and potentially spreading the virus. Now that there are cases in some Myanmar border towns, Thailand checkpoints are on high alert.

The daily number of Covid-19 cases in Myanmar continues to rise. The country reported a total of 6,471 cases with 100 deaths and 1,445 recoveries, according to Worldometer.

In some border districts, police have placed barbed wire along the border to prevent people from entering illegally. Security has increased and dozens of migrants have been arrested in the past month for allegedly entering Thailand illegally. Even volunteers have stepped up to patrol the borders. No migrants arrested for allegedly crossing the border have tested positive for the virus.

The daily number of Covid-19 cases in Myanmar continues to rise. As of September 22, the country reported 6,471 cases with 100 deaths and 1,445 recoveries, according to Worldometer.