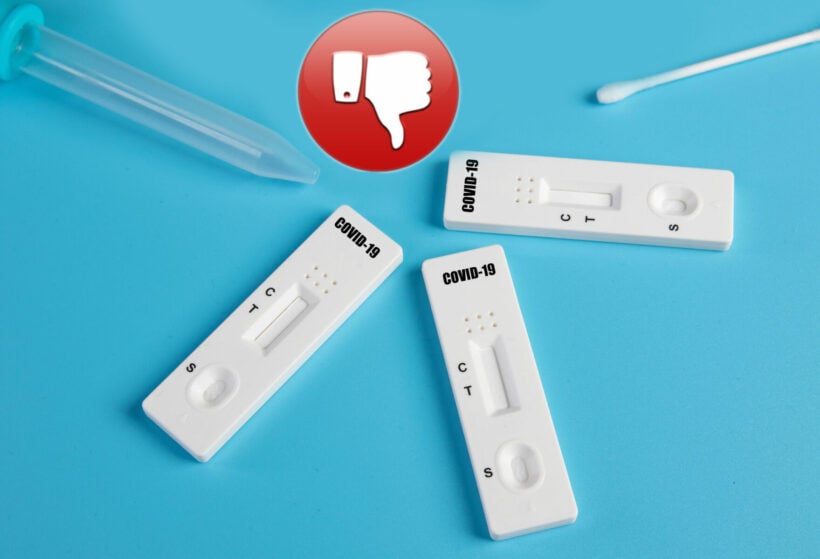 Like many things regarding Covid-19, or Thai policy in general, the saga of importing controversial antigen test kits has reversed directions yet again. Following an order last week to proceed with the purchase of 8.5 million Chinese-made antigen test kits, the cabinet has now withdrawn the purchase approval.

PM Prayut Chan-o-cha supported the cabinet decision to withdraw the deal to purchase 8.5 million antigen test kits manufactured by Lepu Medical Technology in China. A Deputy Government Spokesperson said that Minister of Public Health Anutin Charnvirakul clarified that the kits were made for home use, and are not intended for professional medical application as warranted by the World Health Organisation.

The WHO has not approved any home-use test kits and the Chinese kits had previously been pulled from shelves in the United States after a warning from the US Food and Drug Administration that they are ineffective. The deal, brokered by Ostland Capital and the Government Pharmaceutical Organisation, would purchase 8,.5 million test kits at 70 baht each. The National Health Security Office had set a median price of 120 baht for antigen test kits.

The plan was originally announced by the GPO with pride on August 17 after medical facilities demanded the fast procurement of antigen test kits in order to more rapidly identify and handle Covid-19 infections. But the deal quickly came under fire, most vocally by the Rural Doctors Society, for the prioritisation of the cheap 70 baht price to the detriment of effectiveness that the Chinese kits clearly lacked.

The plan was paused, with government officials saying they will first test the efficacy of the kits before proceeding. But just 2 days later the government reversed course a second time and decided to go ahead with the deal in an effort to get test kits quickly.

The Rural Doctors Society, responding to the whiplash of a third reversal of the government’s plans, said they will proceed with their plans to thoroughly test and vet the antigen test kits and their effectiveness regardless of the new decision.