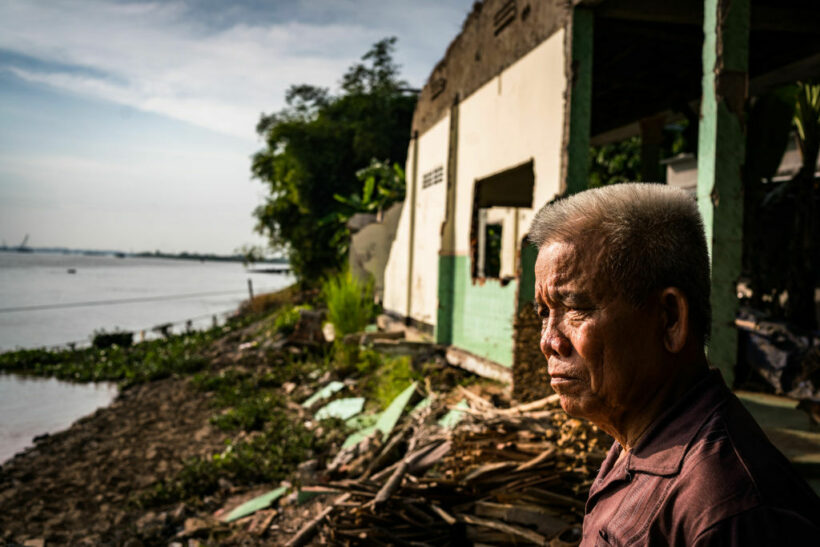 Nguyen Van Thuong, 71 stands in front of his former neighbors house which has been destroyed and fallen into the river as a result of erosion in Cao Lanh, Dong Thap Province, Vietnam. (Photo by Quinn Ryan Mattingly for China Dialogue)

The following story was written by Michael Tatarski for China Dialogue, a non-profit focused on environmental challenges related to China.

One night two years ago, Lam Thi Le and Nguyen Van Thuong heard loud cracks coming from their neighbours’ riverfront home. The neighbours left, and a day later half of their house collapsed into the broad Tien River as the land beneath it slid away.

The shell of the remaining half sits precariously on the jagged river bank. Le and Thuong live a few metres inland. Nearby, workers use a machine to pack rocks onto the riverbank, laying the foundation for a concrete embankment designed to prevent further erosion.

This community in Vietnam’s Dong Thap province is not unique. The Tien is one of the Mekong River’s main branches flowing down from Cambodia’s capital Phnom Penh. In recent years, dams built upstream in China, Laos and Cambodia and local sand mining have starved delta provinces such as Dong Thap of sediment, causing once-stable land to erode.

The Mekong’s average sediment load used to be 160 million tonnes, according to Marc Goichot, WWF’s Lead for Freshwater in the Asia Pacific, but the construction of dams on the river has reduced this by almost 80%.

“Dams and sand mining are working in a cumulative manner,” Goichot said. “Sand mining is making the impact of dams not only worse but much faster. We know that the impacts of the Aswan dam in Egypt took 50 years to reach the Nile River delta, and in the Mekong it’s much faster.”

Vietnam’s agriculture ministry estimates that the delta, which produces much of the country’s rice, aquacultural goods and fruit, worth billions of US dollars, loses 500 hectares of land per year to erosion.

A nearby ferry crossing protected by a stout concrete embankment leads to Tan Thuan Dong, a large island carpeted by mango orchards in the middle of the Tien River. A sign on a narrow road leading to the northwest edge of the island warns people that they are entering an erosion zone.

Pham Thi Phi, 80, and her family had to move five years ago from their house by the water because the erosion was worsening. Her former home and several neighbours’ houses no longer exist, while the river continues to eat away at the island, taking precious mango trees with it.

“People are losing land and trees, and orchards are losing money,” Phi said. “When I was younger, I had a sampan, and I would take people in it to the nearby temple for charity, but when the land washed away, it took my boat with it.”

Upstream dams have also had a significant impact on water levels in the Mekong delta. Canals and irrigation ditches were nearly empty during a visit by China Dialogue. Small boats rested on almost dry land. The spindly legs of stilt houses were fully exposed.

“We used to have two boats to leave the house when the water was high, but that doesn’t happen anymore,” said Phi.

At the time, water levels throughout the Mekong basin were low due to announced maintenance on the Jinghong hydropower station, the most downstream dam of China’s 11 such facilities on the river.

Nearby, the road ends with a ragged edge of tarmac beyond which the river has consumed everything. A half-dozen sand-mining barges sit off Tan Thuan Dong’s coast, the diesel engines of their excavators shattering the quietude of the rural island as they dredge to feed Vietnam’s voracious construction industry. 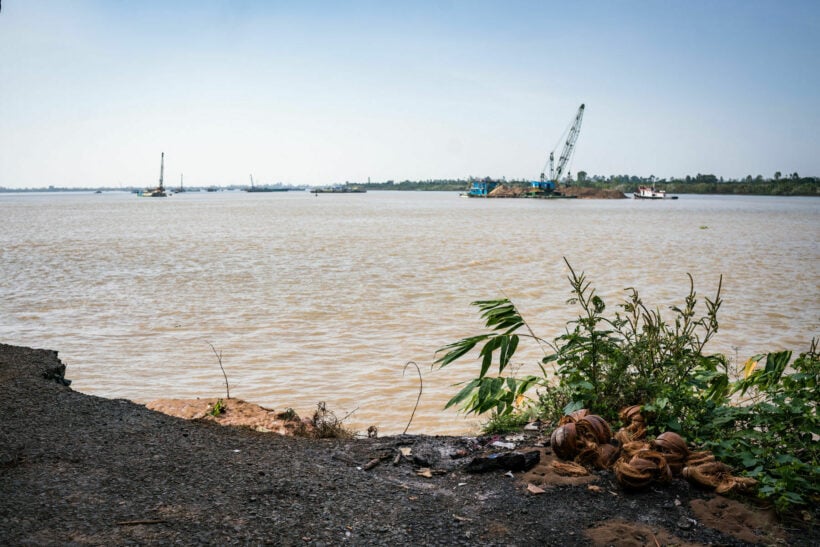 A road on Tan Thuan Dong island ends abruptly where it has been washed away. In the background, excavators dredge the river for sand to fuel Vietnam’s construction boom. (Photo by Quinn Ryan Mattingly for China Dialogue)

“I’ve lived here for nearly 60 years, and the erosion started about 10 years ago,” said Nguyen Thi Sum. She lives with her husband and sister in the last surviving house on the road, just a few metres from the river. By the water, concrete foundations hint at former buildings.

The Jinghong dam, considered one of the most impactful on the Mekong’s sediment and water flows, came online in 2008, around the time Sum said the erosion started. China’s dams on the Upper Mekong and those built in Laos and Cambodia with varying levels of Chinese investment have proved a point of contention among downstream national and environmental groups.

Vietnam is a member nation of the Mekong River Commission, an advisory body on transboundary governance of the Mekong. However, the commission has no powers to stop the construction or planning of upstream dams in China or dams financed by China.

“There used to be more houses, but people moved away,” Sum said. “We will stay here until we can’t, maybe one or two more years.”

Both Sum and Phi said the local government had done little to help. Unlike on the mainland, no protective embankments were being built, despite the island being advertised as a domestic tourism destination. Promises of money to help with relocation costs have been unmet, and damaging sand mining occurs in broad daylight.

Neither of the women had any knowledge of the impacts of upstream dams, nor did Le and Thuong across the river. All four largely blamed natural causes for the erosion.

According to Goichot, embankments are not an appropriate solution and can do more harm than good: “Engineers think that static is solid, and in most places it is, but in a very dynamic place like the delta, they make things worse. If you put an embankment on sand, you reflect the energy of the water downstream, so you create conditions for erosion to get worse.”

In neighbouring An Giang province, National Highway 91 connects Can Tho, the Mekong delta’s largest city, with the Cambodian border 100 kilometres away. Heading toward Cambodia along the bank of the Hau River, the Mekong’s other main branch in the delta, the road eventually runs into a barrier and a large sign warning no vehicles to enter. While traffic is diverted onto a new road, pedestrians can enter the barricaded area.

Further on, a 40-metre long chunk of highway has disappeared into the water. This sinkhole – and another large one just down the road – appeared in the summer of 2019, making national news. Whereas previous domestic media coverage had often pointed to climate change as the cause of such events, VnExpress now squarely blamed hydropower developments and sand mining on the river upstream in Cambodia and Vietnam.

“The erosion started here in 2010, and the government built an embankment, but the erosion kept shifting and getting worse,” said Huynh Thi Thu Diem, who runs a café and shop near one of the cratered sections of road.

There were houses on the riverside of the highway as well, but they are long gone. Only a narrow strip of overgrown land separates the water from the remaining road.

“At first, they quickly repaired the highway, but that failed too, so now they’re building a bigger parallel road inland,” Diem added. “The construction workers said this was caused by natural changing currents, though I’ve seen in the news that Chinese dams hold back water.”

She said that some neighbours had left the area after receiving financial assistance. She believes the government will help her as well if it becomes too dangerous to stay.

Further down the road, Thi (not her real name) lives on the edge of one of the sinkholes. She sells rice from her home and previously benefitted from buses stopping outside. Only motorbikes and bicycles can pass now, creating a peaceful setting for a front-row seat to what might be in store for the rest of the delta. 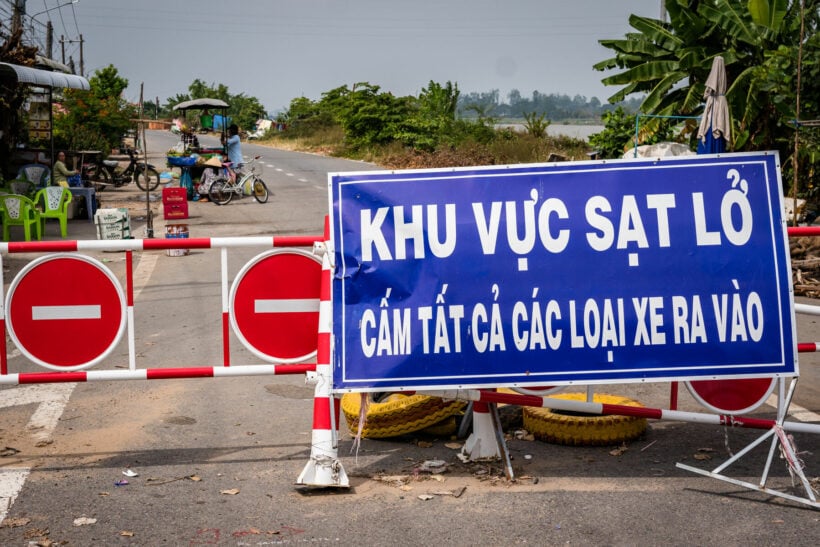 A sign in Vietnamese reads “Erosion area, no vehicles of any kind” in Binh My Commune, An Giang Province, Vietnam. (Photo by Quinn Ryan Mattingly for China Dialogue)

Cracks run across parts of the remaining tarmac, and a machine similar to the one in Dong Thap sits in the river, laying the foundation for an embankment.

“The sinkhole started to form in July and August of 2019. There were houses on the other side of the road,” Thi said. “We were panicked, and officials asked us to remove the front part of our house since nobody knew how large the hole would get. Once it stopped collapsing, we rebuilt.”

The lack of highway traffic has hurt her family’s business, said Thi. Like Diem, however, she expressed confidence in local leadership to help them if it comes time to evacuate the area.

Evacuation will likely be necessary, with China, Laos and Cambodia variously involved in plans for a further 10 hydropower dams on the Mekong mainstream, and more envisioned on its tributaries.

Once built, these dams will trap even more sediment upstream, starving the delta of the material that created it over millions of years, while downstream sand extraction removes vast amounts of what is left.

“What still gets through the barriers [of dams] is mainly fine sediments like silt and clays, not sand or gravel,” Goichot wrote in a recent article for China Dialogue. “As a result, riverbeds and banks are not replenished, making sand-mining downstream even more unsustainable and leading to greater erosion in the river channel and banks.”

These powerful forces have created a sense of calm resignation among delta residents threatened by their impacts. “We’ll just keep moving further inland until we can’t anymore,” Le said in the shadow of the collapsed house on the Tien. “Then, we’ll go to a relocation area far away from the river.”