A woman in Thailand’s lower northern province of Nakhon Sawan allegedly planned to have her husband run over by a car, so that she and her friend could share his 10 million baht insurance payout. The woman, 48 year old Pratheep, and her friend, 60 year old Jaemchan, allegedly hired Jaemchan’s nephew to do the deed for them, running Pratheep’s husband over with his car.

The nephew, Ekkasit, allegedly carried out the plan, and ran over Pratheep’s husband on a road in Banphot Phisai district. However, the husband survived, although he was critically injured. Police found Ekkasit’s car in a roadside paddy field with its front damaged. They also found the husband’s damaged bicycle he had been riding when Ekkasit hit him.

While the crash first looked like just another road accident, police investigators noticed a few fishy signs. After they made Ekkasit re-enact the crash, and intensely questioned him, Ekkasit admitted that Jaemchan had hired him to kill Pratheep’s husband. Pratheep could then claim her husband’s insurance pay-out.

After the confession, investigators collected more evidence before questioning Jaemchan. 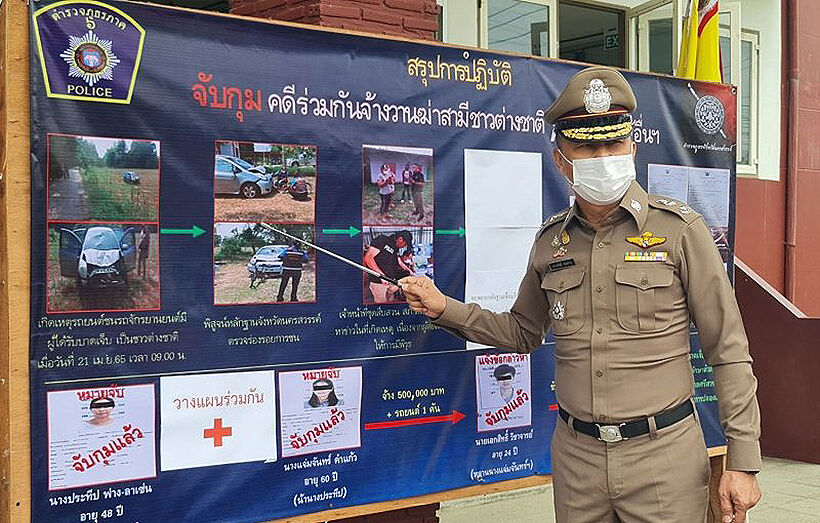 Pratheep and her husband Pia, who is Danish, used to live in Denmark together before they moved to Pratheep’s home province of Nakhon Sawan. They have two children. The couple had reportedly been fighting recently, and Pratheep had asked for a divorce and for their assets to be divided.

When Pia refused her request for a divorce and settlement, she had reportedly reached out to Jaemchan. Jaemchan had already been accused of a contract killing 10 years ago, but the charges were dropped. Jaemchan reportedly promised Ekkasit a new car if he carried out the act.

An very similar incident happened in Thailand 2 years ago when a 63 year old Chiang Mai woman was arrested for allegedly hiring a hitman to kill her ex-husband because she wanted to claim his life insurance payout. Another incident of spousal domestic violence happened earlier this month when a Chon Buri man killed his son and wounded his wife in a shooting, before killing himself.

Fanta
4 minutes ago, HolyCowCm said: They have 2 children together. What kind of mommy monster is this woman killing he dad unless he is just not that nice at all. Maybe we should ask her “friend” and co-conspirator 60 year old…

AdvocatusDiaboli
Maybe all Farang road deaths need to be reviewed ….. especially the life insurance payouts ….
HolyCowCm
14 minutes ago, Fanta said: Maybe we should ask her “friend” and co-conspirator 60 year old Jaemchan? I think the daughters might be the best for an opinion. That is if they are not daddy's little girls. But it is not…
JamesR
13 hours ago, Ramanathan.P said: Let this be a lesson to all those men who is thinking of getting settled permanently with a Thai wife. I am not blaming all. There are some good girls around. But in most cases…
PATRIQUE
getting the father of their kids of a bike , with a 50 - 50 quote he survives disabled , in an attempt to have him killed ..... what else can u get wrong in life please

Is Thailand no longer a tourist favourite | Thailand Weekend Update