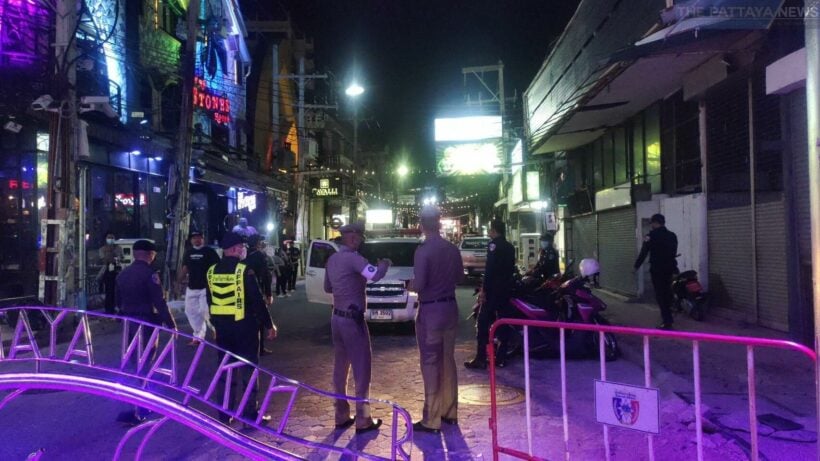 Police on Walking Street, photo by The Pattaya News.

After Pattaya’s Walking Street started reopening to cars again from 7pm to 6am, police went to the street last night to make sure tourists safe. A lieutenant from Pattaya Traffic Police told The Pattaya News that over 90% of business operators had cooperated with the closure, however, “some still don’t know the rules” and are parking in the area.

Walking Street, the city’s featured tourist magnet, had allowed cars at all hours since Covid-19 first broke out in 2020. But as Thailand’s Covid restrictions slowly eased, and bars started reopening, the number of people heading back to Walking Street has increased, creating problems as visitors dodge the traffic. The police lieutenant, Arus Sapanon, said…

“We have to make sure that police, emergency responders, or firefighters can easily and quickly enter the area if anything happens by shutting to vehicle traffic at night.”

Now that Thailand’s official alcohol curfew close time is set to move from 11pm to midnight tomorrow, and travel restrictions continue to ease, the number of walkers along the famous Pattaya foreshore street are likely to rise.

Last month, an entertainment official in Pattaya called on authorities to move closing times on venues to 1am instead of 11pm. The official was the secretary of the Pattaya Association of Entertainment Venue Operators. Many bars are already operating beyond the official curfew times as bar and nightlife proprietors battle to re-start their businesses.

Nevertheless, it looks like Pattaya’s nightlife is slowly making a comeback.

Dmitrii
Accordingly to the picture in the article, the nightlife returns to Walking Street VERY slowly 😂😂😂
Skip
police went to the street last night to keep tourists safe... Sort of an oxymoron

Woman in northern Thailand allegedly planned to have husband killed