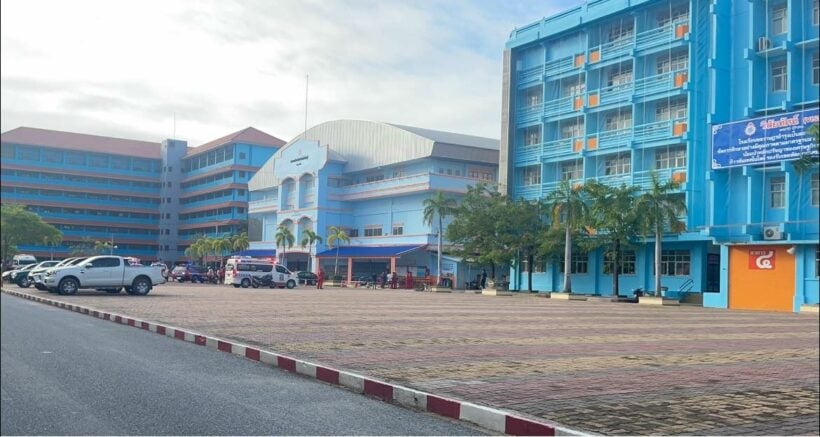 A man shot and killed his son before killing himself at a school in Mueang district of Chon Buri province yesterday. The father and son both had gunshot wounds on their heads. The man also shot and wounded his wife, who was rushed to Chon Buri Hospital.

The wife, Arissara, had arrived at the school with their son first. The son, who was 13 years old, was reporting to enrol at school, as it was the day for all new students to enrol. The man, Anucha, arrived at the school in a different car later. The couple reportedly had a tense quarrel before Anucha shot his son and wife, shortly before shooting and killing himself.

One neighbour told Thai media that Anucha and Arissara often fought. Other reports say Anucha physically assaulted Arissara last month, and she filed a complaint with the Samet police station against her husband for physical assault and knife attacks. Police plan to question Arissara later.

Police and rescue workers say they found all three family members lying on the ground inside the school compound. Thai media reports that Anucha shot his son first, and then Arissara, before turning the gun on himself.

Arissara is 49 years old, and Anucha is 50 years old. Their son’s name has not yet been reported.

This news comes just one week after another another man in Chon Buri stabbed his sister to death in an argument. The incident happened in Sri Racha.

HolyCowCm
And this is why I hope there is some sort of a hell.
PATRIQUE
Very difficult , to imagine a mature human being with 50 years on his back has behaved completely normal and than just does this . On the other side in split up situations I have seen many men or women…
JMJM
14 hours ago, ThaiEyes said: What a deranged and selfish bastard. If he wanted to commit suicide, he should have just done it. Did you just misunderstand the article, or did you not read it at all?
HiuMak
Gen Z nowadays....Sigh

ThaiEyes
9 hours ago, JMJM said: Did you just misunderstand the article, or did you not read it at all? I understood what was printed. A man brought a gun to a school where they were enrolling students, had an argument…