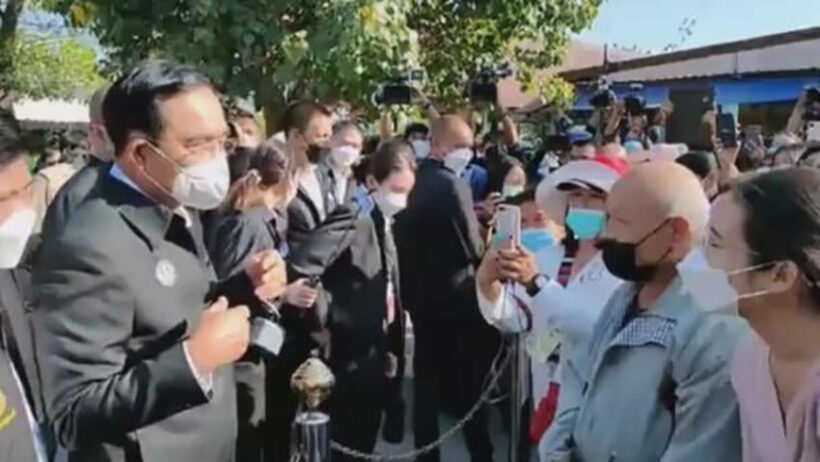 Police in the north-eastern province have denied an allegation that they detained a woman who told the Thai PM to, “retire quickly”. Following the incident, which occurred in the Udon Thani district of Ban Dung while the PM was visiting the forest temple of Wat Kham Cha Not, reports emerged that the woman had been taken to a police station for an “attitude adjustment”. The Bangkok Post reports that Pitsanu Unahaseri, Udon Thani police chief, and Jakrapop Srichanta, Ban Dung police chief, strongly deny the allegation.

The story first broke when the woman, a noodle vendor, addressed the PM as he met with members of the public in the grounds of the temple. She called out to him, suggesting he retire quickly if he couldn’t deliver what the country needed.

“We need a lot of development. If you can’t do that, I’d like to ask you to retire quickly to allow others to perform these duties.”

According to the Bangkok Post, the PM turned back to the woman and asked her what she’d said, to which she responded by repeating her statement. The PM responded in turn by telling her to check his achievements.

“Go check what I’ve done and how much progress I’ve made.”

The woman subsequently claimed she was visited by the police and taken to the local station, where her details were recorded and she underwent an “attitude adjustment” session. However, at a press conference called to address the claims, the police have refuted the allegations. Pitsanu says this never happened and the police would only ever act as the law permits.

“Anyone who is uncertain about their safety should immediately inform the police. We would be glad to provide due protection. In this case, I would like to convey a message to the woman that she can rest assured that, from what happened, she has the right to free expression as well as to protection.”

Faz
Off top posts and replies have been removed.
Cathat
An absolute belter.complete respect for this lady.
JackMeOff
Next feat and photo op for her will be defiantly standing down in front of all the junta tanks that come to get her.
Asian
4 hours ago, yetanother said: "The woman is a 28 year old noodle vendor from Udon Thani, and during the greeting of PM Prayut Chan-o-cha she got the chance to ask hin some straight-forward and pointed questions. The exchange captured…
Manu
11 hours ago, yetanother said: ==> that is hilarious, in a small way restores my faith that the general public here might actually have a clue " What a condescendant comment, the arrogant-white-man-syndrom in all its splendeur. No doubt…