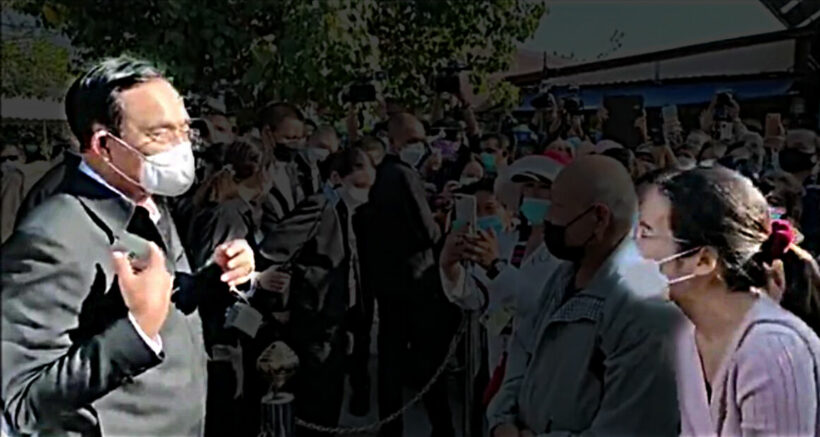 A woman who told PM Prayut Chan-o-cha to his face to “retire quickly” claims that police requested a meeting with her to discuss her offence. The incident took place on Wednesday when the prime minister visited Udon Thani and a group of well-wishers were welcoming him. Video of the day captured the interaction and caused a stir in media.

The woman reported that police in Ban Dung district where the incident took place visited her home asking to meet with her to make an official record of the incident. She told them she had done nothing wrong and refused to meet with them.

The woman is a 28 year old noodle vendor from Udon Thani, and during the greeting of PM Prayut Chan-o-cha she got the chance to ask hin some straight-forward and pointed questions. The exchange captured on video saw the woman saying, “We need a lot of development. If you can’t do that, I’d like to ask you to retire quickly to allow others to perform the duties.”

The prime minister was caught off guard and simply responded, “what?” She repeated her question and he retorted telling her to check out the progress he’s made. She responded with a sarcastic joke.

“I know … I know. You told us to grow lemons and raise fish so we could sell lemons on Mars.”

The Office of the Attorney-General said police don’t have the authority to make personal records and fingerprint the woman, saying that can only be done for criminal suspects, bodies suspected of unnatural deaths, and for people seeking certain permits or public office. They said the woman was not a suspect for any crime so she had no reason to submit to police.

The woman says police came to speak with her about the incident with PM Prayut, but a government spokesperson denied the claim saying he talked to the governor of Udon Thani and the local police. He said she was not in any trouble

“The government has never prohibited anyone from expressing opinions, regardless of their political views. We’re ready to listen and clarify [misunderstandings] with correct information all along. The prime minister looks after all groups of people equally.”

Faz
Off top posts and replies have been removed.
Cathat
An absolute belter.complete respect for this lady.
JackMeOff
Next feat and photo op for her will be defiantly standing down in front of all the junta tanks that come to get her.
Asian
4 hours ago, yetanother said: "The woman is a 28 year old noodle vendor from Udon Thani, and during the greeting of PM Prayut Chan-o-cha she got the chance to ask hin some straight-forward and pointed questions. The exchange captured…
Manu
11 hours ago, yetanother said: ==> that is hilarious, in a small way restores my faith that the general public here might actually have a clue " What a condescendant comment, the arrogant-white-man-syndrom in all its splendeur. No doubt…