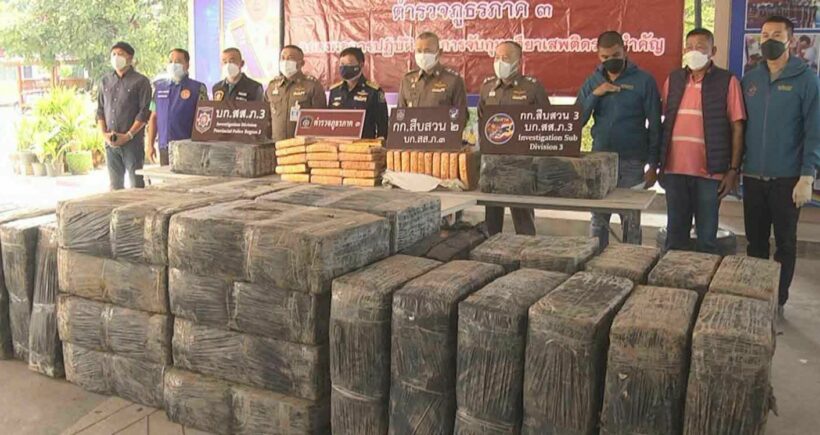 PHOTO: Police caught 3 vans in Korat with 1.8 tonnes of marijuana. (via Prasit Tangprasert)

In Korat, the northeastern province of Nakhon Ratchasima, police found 4 men in possession of more than 1.8 tonnes of dried marijuana and arrested them. The arrest took place this morning according to the Provincial Police Region 3 commissioner.

Police had ramped up patrols of the Mitrapap highway after receiving a tip that a large shipment of compressed marijuana would travel along that route, from Khon Kan to Nakhon Ratchasima. The teams that were searching along the highway pulled over 3 vans early this morning that were travelling between Sida and Non Daeng districts when police pulled them over.

The first van had a sticker on it from a Thai media association, and police say it was acting as a lookout car as the convoy travelled across Thailand. The other two vans, however, were filled with illegal drugs, about 1,824 kilogrammes of dried marijuana.

According to the police, the ganja stash they seized from the 2 vans has a street resale value of about 110 million baht.

The 4 men who had been travelling in the three vans were all Thai nationals, aged between 24 and 39 years old. They were all arrested and taken into custody.

The men are alleged to have confessed to the crime, stating that they had been paid 50,000 baht to transport the marijuana and that it had come from a border province in the North of Thailand. They were tasked with delivering it as far as Bangkok, where the drug haul would be further shipped to the south of the country.

All 4 men were arrested on charges of possession of illegal drugs with the intent to sell.