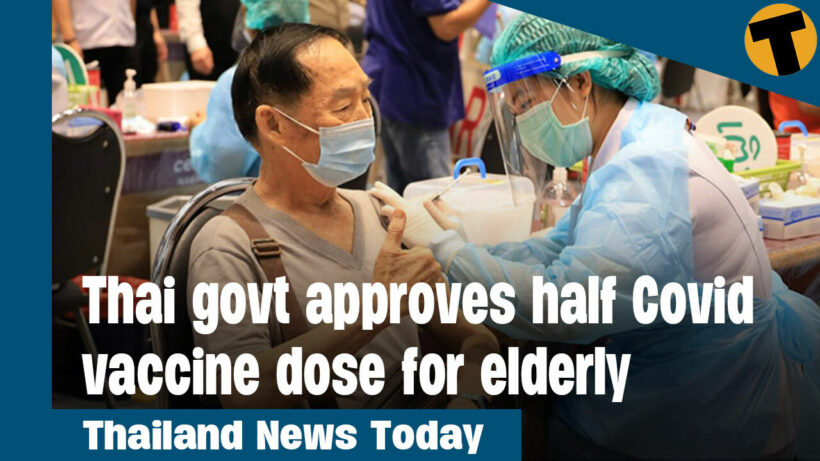 In a bid to persuade Thailand’s elderly population, and those with chronic illnesses, to get a Covid booster, health officials have approved using half the usual dose.

Dr. Kiattiphum Wongrajit says the half-dose will be an mRNA vaccine, such as Pfizer, adding that officials are acknowledging the fear of side effects among the elderly.

According to a Nation Thailand report, Kiattiphum says 97% of the Covid deaths reported yesterday were in people in high-risk groups such as the elderly, those with underlying health conditions, and pregnant women. Out of the 70 deaths reported, 47 were over the age of 70, and 52 had only received a single vaccine dose or none at all.

Kiattiphum was quoted as, saying “Studies found that 30% of the senior Covid patients did not have lung inflammation. So, if this group was given better protection, we should be able to reduce the number of deaths. If up to 60% of the elderly population gets the third shot, deaths can be more than halved.”

The health ministry is launching 2 campaigns ahead of the Songkran holiday next month. The first will be to persuade the elderly population to get vaccinated or boosted prior to receiving family members over the holiday. The second campaign is aimed at those who plan to visit their elderly relatives. The campaign will encourage them to avoid mass gatherings and large social events for at least a week before visiting their home provinces and to take an antigen test before travelling.

The Thai man who murdered a Swiss tourist at a Phuket waterfall last year has been sentenced to life in prison by the Phuket Court.

28-year-old Teerawat was initially sentenced to death, but it was then reduced to life imprisonment given that Teerawat confessed to investigators.
The body of 57-year-old victim Nicole Sauvain Weisskopf, the deputy protocol chief of the Federal Assembly of Switzerland, was found at a creek near the Ao Yon waterfall in August 2021. A black sheet covered her body and she was only wearing a T-shirt and jacket. Her shorts and underwear were found nearby.

Teerawat was in the forest collecting wild orchids and plants when he saw the Swiss woman sitting on a rock by a stream with her feet in the water. At first, he intended to rape her. Reports say he attacked her from the back and grabbed her neck in a chokehold. She reportedly fought back and they both fell into the water.

Teerawat strangled her until she was unconscious and then took off her pants and underwear. According to reports in Thai media, Teerawat did not have sexual feelings after turning the woman around and seeing that she was dead. He then covered the body with a black plastic sheet, took 300 baht from the body, and fled.

Yesterday, the Phuket Provincial Court announced the judgment and invited the victim’s family in Switzerland to join through video conference. The court found Teerawat guilty of murder and sentenced him to death, but given that Teerawat confessed to the crimes throughout the questioning, the penalty was commuted to life imprisonment.

Weisskopf had entered Thailand under the Phuket Sandbox reopening scheme, which had just launched a month prior and was the first entry programme allowing an alternative to quarantine since the start of the pandemic.

Officers found a camp at a mountain in the southern province Songkhla where they suspect an alleged hitman on Thailand’s most wanted list was hiding.

The 45-year-old who is wanted on multiple charges involving murder allegedly shot an M16 rifle during a police chase, killing an officer.
Following the gunfire exchange, the alleged hitman Jumrat, along with two other suspects, managed to escape. Officers later found a car parked by a mountain and launched a search to find the suspects.

More than 100 police, soldiers, and forest rangers searched Songkhla’s Khao Khao Mountain and found a camp set up with a temporary shelter, clothes, and first aid equipment. Police say they believe the suspects fled the camp shortly before officers arrived.

Officers in the Isaan province Buriram are still searching for the senior forest ranger who allegedly shot and killed his ex-wife’s son Sunday night.

The victim’s family says the ranger called them after the shooting, saying he threatened to murder the entire family. He is believed to be hiding in a forest near the Dongyai Wildlife Sanctuary.

The 45-year-old forest ranger, Pitpirun, allegedly fired shots at his estranged wife’s house using a shotgun from the sanctuary. His ex-wife, her new partner, and her sons tried to flee the home, but the 20-year-old son was shot in the neck and killed.

The forest ranger is believed to have fled into Dong Yai forest with a shotgun and pickup truck that both belong to the Dong Yai sanctuary. The truck was found yesterday, but the gun has not been recovered. More than 150 police, together with other forest rangers and reinforcements from other police offices, were enclosing and searching the forest to hunt for the suspect.

After the shooting, he called back to his ex-wife, saying he would murder the whole family soon. Police officers have been on standby and are closely monitoring the entire family, both day and night, to ensure their safety until the suspect is arrested.

Travellers from Thailand and Cambodia, who are vaccinated against Covid, can now enter Malaysia by air without undergoing a lengthy quarantine through the country’s Vaccinated Travel Lane, or VTL, scheme, which was first launched with Singapore.

Malaysian PM Ismail Sabri Yaakob recently announced that the country will fully reopen borders to vaccinated travellers on April 1. Similar to Thailand’s Test & Go entry scheme, Malaysia’s VTL scheme requires those travelling from Thailand, Singapore, and Cambodia to self-isolate at their accommodation while they wait for results from an on-arrival Covid-19 test to come back.

Under Malaysia’s so-called “test and release” policy, travellers will undergo a Covid swab test upon arrival and will then need to self-isolate at their respective accommodations while they wait for test results to come back, which can take up to a day.

Transport Minister Wee Ka Siong released a statement yesterday saying the arrival health protocols for Thailand, Singapore, and Cambodia will be “uniform” and all abide by the test and release measures. VTL travellers from Singapore have needed to wait in the airport terminal until their on-arrival test results are back, which can take three hours, and then go through immigration if their results are negative. Starting tomorrow, the travellers will be able to isolate themselves at their accommodation until their tests come back negative.

Travellers will be free to end their self-isolation if the results come back negative, but will be required to follow the Health Ministry’s existing health standards if the results are positive.

Marine officials in Thailand are looking into building a cruise ship terminal on Koh Samui, a popular Gulf of Thailand island off the Surat Thani coast.

A feasibility study is being launched by the Marine Department. The department has chosen a potential location of Leam Hin Kom in ตลิ่งงาม subdistrict which is on the southwest tip of Koh Samui, which has waters deep enough for the large ships. It’s about 10 kilometres south of the ลิปะน้อย Pier which runs ferries from Surat Thani’s Don Suk Pier.

Two cruise ships will be allowed to dock at the terminal at the same time, under the current plan. It would also be able to accommodate up to 80 yachts and six ferries.

Officials are looking into a public-private partnership model to fund the construction, with the government covering costs for land expropriation and terminal construction, while a private sector partner will pay for the equipment and port maintenance.

Thailand’s Transport Ministry has also been pushing for the construction of more cruise ship terminals to draw in tourists. Koh Samui was chosen for its popularity among tourists and its natural beauty.

Before the pandemic, cruise ships visited Koh Samui 59 times, and the Bangkok Post says it was the third busiest cruise stop in Thailand, following behind Phuket and Chon Buri’s Laem Chabang.