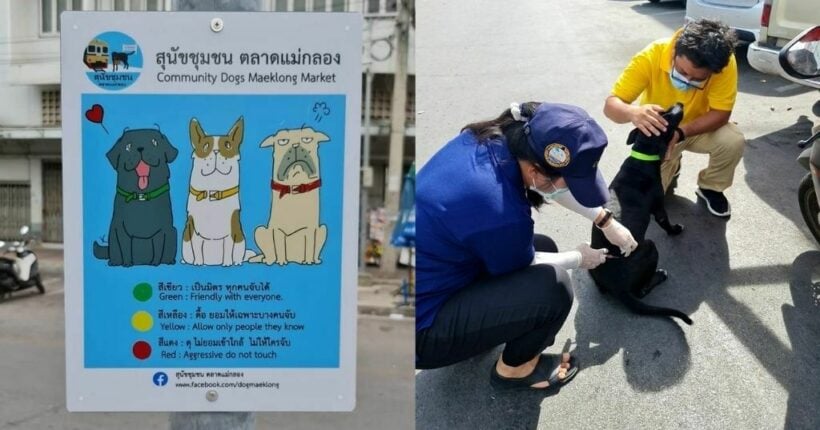 Stray dog populations have been a longstanding issue in Thailand, but a flower seller at a market in the central province Samut Songkram saw a way to make the dogs part of the community and created a project to help take care of the dogs in the area. Now each dog has a name and is marked with a collar showing if they are friendly or aggressive.

Using a stoplight colour-coded system, collars were put on each of the stray dogs around the Meaklong Market to identify if a dog is friendly or aggressive. Green collars show the dogs are friendly with everyone, yellow shows the dogs only allow people they know to pet them, and red is for aggressive dogs that should not be touched. A sign is also set up at the market to inform visitors.

A pendant with a QR code is also on each collar, showing the dog’s name and contact information if the dogs cause any problems with people. Most of the phone numbers are for Nattapong “Nueng” Ngamsanga, who started the project.

Nueng owns a flower shop in front of Somdej Phra Phutthaloetla Hospital near the market. He is a dog lover and also lets his dog play together with stray dogs in the community. In the interview with Thai media, he shared that he was also worried that the stray dogs spread disease and fleas to his pets. So, he had an idea to take care of the stray dogs, not only for his dog’s safety, but also for other people to give love to those dogs. He says he believes that stray dogs can be a part of a community.

Nueng got the stray dogs to get vaccinated and sterilised. He then gave them each a collar according to their personalities. He shared in the interview that people could contact him if the dogs cause them any problems, adding that he is willing to be responsible for it.

Many Thai netizens who visited Maeklong Market were impressed with the programme and shared pictures of a sign about dog collars saying it was lovely and useful. Nueng added that the stray dogs were more acceptable after launching this programme. He says many people, including authorities, do not care about stray dogs. He says that if stray dogs live their lives happily, people in the community would also be happy.

Benroon
16 hours ago, HolyCowCm said: Might be able to use this color code system in some girly bars. Just need to add a few more colors. Yeah but I don’t think the red collar would mean angry 😉 8…
HiuMak
21 hours ago, Thaiger said: Stray dog populations have been a longstanding issue in Thailand, but a flower seller at a market in the central province Samut Songkram saw a way to make the dogs part of the community and…

Cabra
Reminded me of the Peter Sellers bit in the Pink Panther...

Phuket police on the hunt for alleged shoplifting foreigner