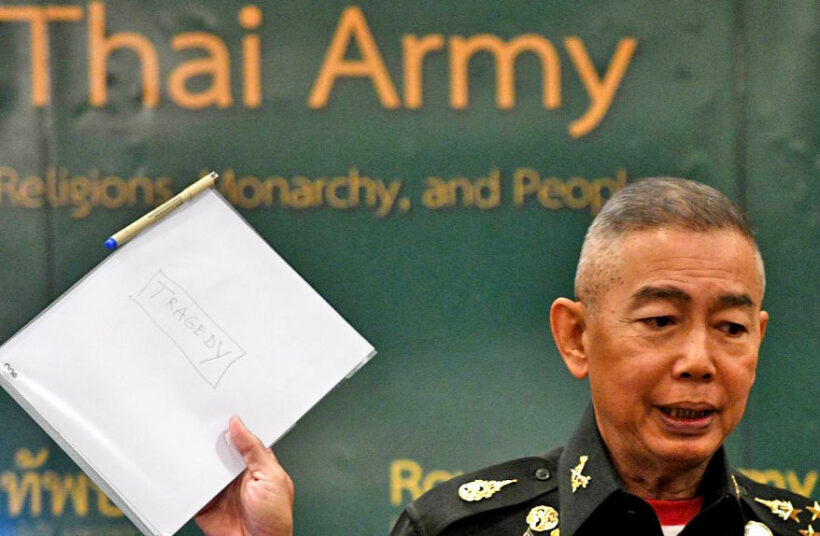 The retiring Thailand army chief vowed to reform the military’s business operations after the February 8 mass shooting in Nakhon Ratchasima where an armed soldier shot and killed 30 people and injured 57 others. He failed to fulfil his promise, according to co-founder of the Progressive Movement and a staunch critic of the army Thanathorn Juangroongruangkit.

The gunman shot and killed his commander and other soldiers at the Surathampithak army camp before going to Korat’s Terminal 21 shopping mall and firing shots at civilians. The gunman, Jakrapanth Thomma, was then shot and killed by police. Since the shooting, General Apirat Kongsompong has made no steps toward military reform, according to Thanathorn, who was also a former leader of the dissolved Future Forward Party.

The motive of the killing is believed to have started with an argument between Jakrapanth and his base commander overpaid commissions on a housing project. In earlier reports, the critic called the army-run businesses, like boxing stadiums, golf courses and resorts, “off-budget funds” because the money is not returned to state revenue, he says.

After the shooting, the General promised to “hastily examine a range of army projects and current practices” regarding army-operated businesses. The critic says the General’s promise of military reform within 100 days was a “lie.” He says the General also failed to hand over documents detailing concessions granted to private companies without bidding, Nation Thailand reports.

At a ceremony last week for retiring generals, the incoming army chief Narongphan Jitkaewtae praised the Apirat for his service and said he would restore peace and be loyal to the Thai Monarchy.