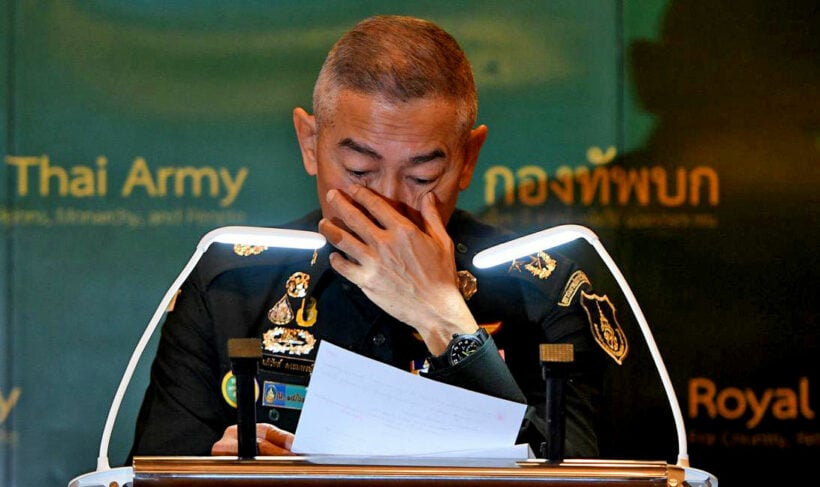 PHOTO: A clearly emotional General Apirat apologised for Korat incident and promised changes will be made - Reuters

Thailand’s Army commander in chief General Apirat Kongsompong is planning a dramatic make-over to the inner workings of the Thai military’s business operations. The moves are in the wake of last weekend’s mass shooting in Nakhon Ratchasima on February 8 where 29 people were shot and killed by an armed soldier (who was also shot and killed).

Last week Gen Apirat said he would “bring back transparency and accountability” to the business operations at the country’s barracks. He said he admits that the army has long been stained by alleged irregularities in issues ranging from welfare housing to loans involving cozy partnerships between military units and private merchants.

For example the Thai army runs sporting facilities, boxing stadiums, golf courses and resorts – many of which will now come under a new microscope following the mass shooting incident.

Problems with paid commissions on a housing project is thought to have sparked an argument between the gunman, Jakrapanth Thomma, and his base commander. He gunned down his commander, and the man’s mother in law, before heading to a temple, and then to Korat’s Terminal 21 and killing innocent shoppers.

The General promised to “hastily examine a range of army projects and current practices” in army-operated businesses which have attracted criticism in the past. His targets include more than 30 golf courses, many partly commercialised and open to the public, 126 radio stations around the country, and a TV station (Channel 5). Coffee houses, restaurants and convenience stores on military compounds are also going to be fully reviewed.

The Army’s staunchest critic, Thanathorn Juangroongruangkit from the Future Forward Party, has described the income from these businesses as “off-budget funds”. He said he feels uncomfortable about this money as it is not returned to state revenue, making much of the business exempt from close scrutiny.

General Apirak, fiercely loyal to the quasi-democratic military government and PM Prayut Chan-o-cha, says he is prepared to take on the challenges of cronyism and nepotism, when Army commanders in the past have allowed these issues to slide, caving in to pressure to maintain the status quo. He said the events in Nakhon Ratchasima necessitated a change in culture.

But many doubt if the General’s best intentions and efforts will be successful as he’ll be challenging long-established conventions and will encounter a lot of push-back, mostly behind closed doors, from officers currently benefitting from this business arrangements.

The General also announced a memorandum of understanding this week that will be signed with the Finance Ministry to ensure “better management of the army’s commercial and welfare schemes”. He also wants the private sector to replace the army in running many of the businesses currently run by the Army. The MoU is designed to pave the way for the Thai Finance Ministry to collect income from the new business owners and disperse fairly to the army or go into general revenue.