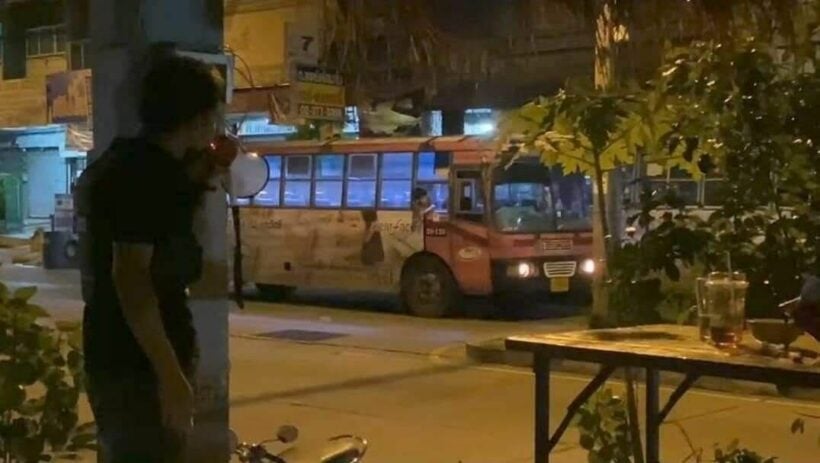 A 24 year old man commandeered a Bangkok bus with a gun holding the conductor and a passenger hostage last night. The gunman surrendered early this morning after a standoff that took hours to resolve with Lat Phrao police. The negotiations reportedly sped up when the man’s mother talked him into surrendering.

Police were notified at 9:30 last night that 24 year old Pheeranat Saengchan was holding the conductor and a passenger of public bus No 8 hostage while they were on Happy Land 1 Road in Bangkok.

Police dashed to the scene to find the No 8 bus resting on the right-hand side of the road. 3 people were visible on the bus.

30 year old bus conductor and former hostage, Nuanphan Muangjeeb, says the gunman got on the bus at Victory Monument yesterday evening but refused to exit the bus when it finished its service on Happy Land Road.

Nuanphan says at this point in the ride Pheeranat pulled out a gun and instructed the driver to head back to Victory Monument so Pheeranat could be dropped off.

The conductor says the driver, 39 year old Sayan Reugphichit, told the man who was brandishing a gun and making demands, that he, the driver, had to get timesheets signed by an official…so he got off the bus and the driver had 1 less hostage.

Nuanphan says the gunman then told her to shut the doors.

Police had the bus surrounded until 11 pm. At this time, Pheeranat disembarked and squatted on a footpath, while still holding the gun and declining to surrender.

Several hours later, at 1:55 am, police found Pheeranat’s mother and brought her to the scene. She managed to talk her son into surrendering.

“A preliminary investigation revealed that he robbed a convenience store in Bang Sue on July 7, using the same 11mm handgun, and escaped with 8,000 baht”, says the police.

The man’s identity was provided at 2:30 am. Thai media reports that Pheeranat is in the midst of financial difficulties and formerly worked as a temporary worker but is now unemployed.

Rebel
Isn't it sweet what mommy can do for  little Somchai

gummy
7 minutes ago, Rebel said: Isn't it sweet what mommy can do for  little Somchai  Well most Thai men don't really mature until they are 30, and/or been the army, and/or been in prison in another country , and/or become a…

Shane
Tense time's for Thailand. This covid situation is sending people nutty. Luckily is mother was there
Leo
I love the charges of "drug use and coercion using a weapon." They forgot the charge of "rerouting a public bus".